Decisiones: Unos ganan, otros pierden spoilers for Thursday, January 16th relate to family dynamics turned deadly. This anthology series has brought some crazy twists, but this episode took the prize. It also reminded us of the TV movies from back in the day. Here’s what you need to know. 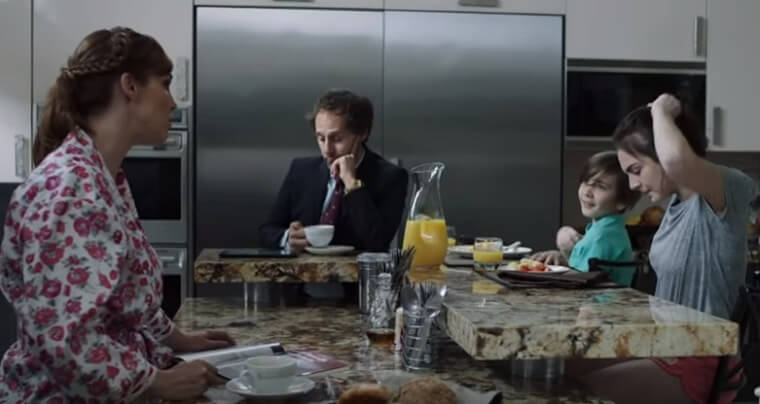 The episode got off to a messed-up start when our lead, Daniela (Regina Pavón), gets an unwelcome wakeup call. Her stepfather, Gustavo (Ricardo Reynaud), has apparently been waiting for her eighteenth birthday for a while now. Considering he’s apparently lived with them since she was around ten or eleven, this is especially creepy. You can’t help but feel for Daniela as she’s forced to pretend everything is normal. While a lucky check-in at Daniela’s door saved her from this sleaze doing anything with her, he won’t back off as the episode goes on.

The biggest loser of this episode in every sense of the word is Ana (Fran Meric). She’s completely oblivious to her husband’s bad behavior. Not only that, but she’s blind to her little angel, Vadhir (Yosef Torres), as well. This kid, born out of her marriage to Gustavo, is a terror. He’s constantly doing everything he can to get Daniela in trouble, for one. Also, he does whatever he can to annoy and embarrass her. When he pulls her hair at the breakfast table and no one seems to notice or care, we want to spank the brat. And basically ground him for the rest of his adolescence. But the Telenovela Gods have a different idea.

Daniela sneaks out of her house one night with a friend, Gabriel (Alberto Garmassi). While they’re out, she meets a guy named Leo (Jason Romo). His appearance alone is enough to send us running. But when he asks her to be his novia almost the second they meet, then “jokes” about how she’s not allowed to have male friends, we really don’t know what Daniela’s thinking.

Their relationship evolves and we can see why she kind of likes the guy. He did slash her stepfather’s tires after they had an awkward meeting with the man. Considering she’s wanted to get back t him, this has to look like a Prince Charming kinda move. Especially for someone from as messed-up an environment as her. Things escalate, however, when he holds a gun to Vadhir’s head. Daniela tells him to go and breaks it off. So, how’d this disaster in the making end up?

First off, after breaking things off with Leo, she ends up giving Gabriel the time of day. They even make a video on her social media about how great a friend can be as a boyfriend. Of course, Leo sees this, and he ends up sneaking into her house with a mission. As he prowls the home, he remembers her asking if he’d get rid of someone for her. This is clearly his way of pleasing her and getting back together. When she discovers their maid dead, Leo sneaks up behind her. A fight ensues that ends with her getting hurt and needing surgery. Vadhir is also killed that night. But the creepiest part is yet to come.

We salute the Telemundo writers and the actress who played Daniela. She did a great job of conveying the frustration with her situation, as well as the shock and horror over Leo’s actions. But her true moment to shine was right at the end. After she’s recovered from the attack, we see her back at school to collect her records. She’s moving in with her biological father and breaks it off with Gabriel. He wishes her well and leaves Daniela alone. At which point, she turns to the camera and repeats the things she once said to Leo: Would you get rid of someone for me? Kill them? Make them disappear? She says all this perfectly calmly while staring straight at the camera. Then, you see just the slightest hint of a smile to indicate her plan worked exactly as she wanted.