‘Days of Our Lives’ Spoilers: Is A Big Reveal About Adrienne’s Death On The Way? 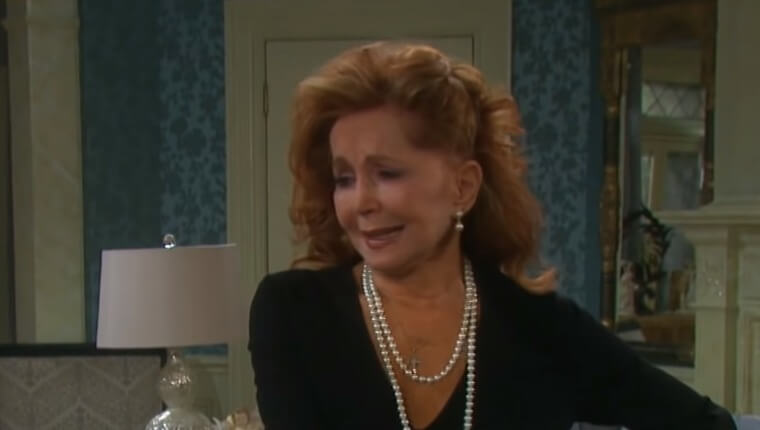 ‘Days of Our Lives’ (DOOL) spoilers reveal the Time Jump led to crazy developments. From Ben Weston’s (Robert Scott Wilson) being on death row, to Kristen DiMera (Stacy Haiduk) and Lani Price’s (Sal Stowers) stint as nuns, there’s been no shortage of WTH moments. But, there are two things, in particular, we know that haven’t had any explanation thus far. One of those is the death of Adrienne Johnson (Judi Evans). But are we finally about to get some truth? And will it tie into another situation? Here’s what you need to know.

‘Days of Our Lives’ spoilers: What We Know

So far, there’s little known about what actually happened to Adrienne. One thing we know is, Will Horton’s (Chandler Massey) in jail for her death. We also know from flashback scenes that it likely was related to a car accident. But how did it actually go down? No one knows. The writers haven’t given us a hint yet. Or, did they?

‘Days of Our Lives’ Spoilers: Clues

We’ve been skeptical for a while that Xander Cook (Paul Telfer) killed Jordan Ridgeway (Chrishell Hartley). The Xander we saw pre-time jump was a man trying to do better. One who refused to kill Ben when ordered. So, if he wasn’t involved in that, what’s the big secret between him and Victor Kiriakis (John Aniston)? All we know for sure is they definitely put an innocent man behind bars. Could that person actually be Will? Let’s take a look at the situation.

There are tons of rumors online right now as to what’s next for Salem. ‘Days of Our Lives’ spoilers reveal this one could be huge. The talk online is that Maggie Kiriakis (Suzanne Rogers) is actually the one who killed Adrienne. Given she was relapsing a bit before the Time Jump, it seems a little impaired driving wouldn’t be out of the question. We think it must’ve been so bad, she doesn’t really remember. We just don’t see her allowing Will to go down for her actions.

Also making more sense in that context is Xander. He and Maggie bonded a lot, and he looks at her as a mother figure. She seems pretty fond of him, too, as she recently expressed her sadness over Eric Brady (Greg Vaughan) shutting him out of Mickey’s life. If there’s anyone Xander would do something so horrible for, it’s Maggie. It’d be protecting her, as well as Sarah Horton (Linsey Godfrey. But there’s one issue with this spoiler…

‘Days of Our Lives’ Spoilers: Why?

Will has taken full responsibility for Adrienne’s death. What’s more, he’s refused to even speak about the events of that night. So why on earth is he taking the heat for a crime he didn’t commit? He seems so adamant about what he did. Was he so trashed he can’t remember, either? Or does Victor have something he’s hanging over Will’s head to make him do this? We can almost see him wanting to protect Maggie, too, but at the expense of Sonny Kiriakis (Freddie Smith)? It seems his own husband being responsible would be a tougher pill to swallow than Maggie. Theoretically, we’ll be getting some of these questions answered in the next few weeks. We’re looking forward to seeing how this all plays out.

Netflix’s ‘Dracula’ Episode One Review – You Are What You Eat