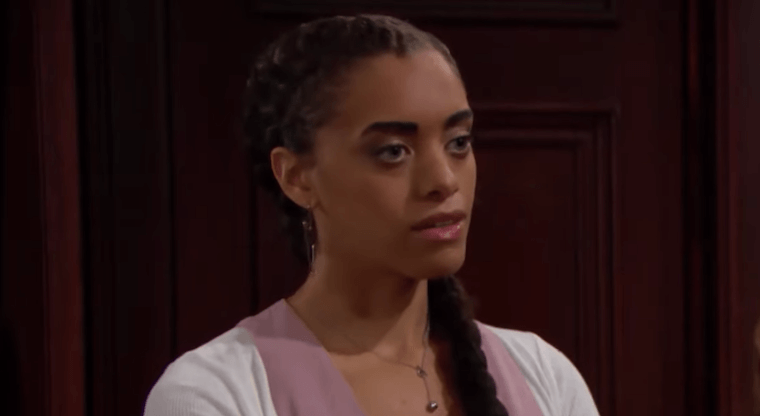 ‘The Bold and the Beautiful'(B&B) Spoilers: Kiara Barnes is opening up about her character Zoe Buckingham, and how she is being forced to act as a double agent between the Forresters and the Spencers. Here’s what she has to say.

Speaking to Soap Opera Digest in a new interview, Kiara Barnes, who plays Zoe Buckingham on the hit CBS soap, puts it this way, “She definitely likes Thomas. Zoe and Thomas have a lot in common. He was kind of being pushed out of the company at the same time as she was, so he was open and there for her and they both needed that. Zoe was on her guard at first because she knows Thomas’s past but also at the same time, it was comforting to be able to take a breath and talk with someone who really gets it. They went through all that drama at the same time, and he’s been there for her when not a lot of people have.

But with that said, because of what happened with Hope Logan (Annika Noelle) and the baby switch, Zoe wants to do this in order to clear the air, so to speak. Kiara further explains, “She feels terrible about what her father put them through and sees this as a way to make up for some of that. Of course, she also makes it clear that she’s willing to help them if they can help her get her job back.”

In other words, Zoe is helping but she’s also covering her tracks and looking out for herself, too. She’s not as naïve as some people perceive her to be. With that said, ‘Bold and the Beautiful'(B&B) fans will have to tune in to find out what happens next!

‘The Bold and the Beautiful'(B&B) airs weekdays on the CBS network. Check your local listings for times. In the meantime, let us know your thoughts by dropping us a line in our comments section below. Also, don’t forget to return to Daily Soap Dish for all the latest details, spoilers, news and updates on General Hospital, The Young and the Restless, The Bold and the Beautiful and Days of Our Lives. For more royal and celeb baby news, come back to Celeb Baby Laundry.

Latest Trailer For ‘Top Gun: Maverick’: Will Tom Cruise Ever Run Out Of Gas?