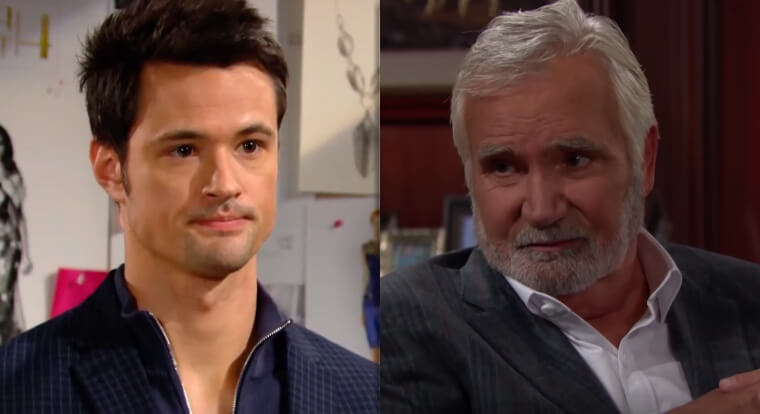 ‘The Bold and the Beautiful’ (B&B) spoilers indicate that Eric Forrester (John McCook) is finally going to take matters into his own hands. Seeing how his family is spinning out of control and with Ridge Forrester (Thorsten Kaye) dealing with his own set of problems, Eric will tell his grandson Thomas Forrester (Matthew Atkinson) just what is on his mind, especially when it comes to his behavior and his latest shenanigans. Here’s what you need to know.

While there’s no doubt that Eric Forrester has had his fair share of troubles, drama, and worries in the past, nothing compares to what Thomas has been doing lately. He is manipulating Hope Logan (Annika Noelle) and trying to make her fall in love with him, despite the fact that she’s a married woman. What’s more, he even offered the custody of his one and only son Douglas Forrester (Henry Samiri) in exchange for sex. It doesn’t get any creepier than that, right?

‘The Bold and the Beautiful’ Spoilers: Eric Forrester In Control – Puts Thomas In His Place

Well, ‘Bold and the Beautiful’ spoilers tease Thomas is ready and willing to do whatever it takes to get his way. And while his father Ridge has been rather sympathetic to his deranged and dangerous son, Eric Forrester is taking a different approach. He doesn’t like what he sees and he wants this to stop. He knows that lives are on the line and if there is something that he refuses to let happen, it’s seeing someone tarnish the family’s reputation and legacy (so much for that, right?).

Seeing how Thorsten was unable to get through to his son, will Eric be able to knock some sense into Thomas? At this point, it seems like he is the only person in this fictional town of Los Angeles that can save Thomas even from himself. If not, then there are going to be a lot of people who will have to continue running for cover, including Hope Logan. Fans will have to tune in for all of the action!

‘Bold and the Beautiful’ airs on the CBS network. Check your local listings for times. For now, let us know what you think by leaving us a line with your thoughts in our comments section. What do you think is next for your favorite soap stars? Also, come back to Daily Soap Dish for all the latest news and updates on your favorite NBC, CBS and ABC daytime television soaps! For more royal and celeb baby news, come back to Celeb Baby Laundry.

‘The Young and the Restless’ Spoilers: Kyle’s Redemption – Did Jack Abbott Get Scammed By Theo Vanderway?

‘Days Of Our Lives’ Spoilers: Remington Hoffman Enters Salem As Li Shin – Chad DiMera’s Boss From Chabby In Paris! What You Need To Know!