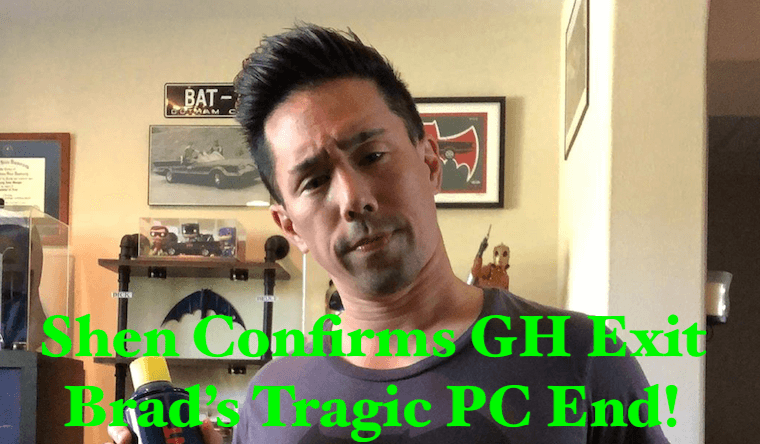 General Hospital spoilers relate a big oops! It seems like Julian finally got what she wanted after all, after tampering with Brad’s brake!

Actor, Parry Shen has seemingly confirmed that he is leaving the TV show, General Hospital. He made his announcement using an Avengers trick.

Parry Shen took to his Facebook page to share an article, quoting actor, Chris Evans directly after the premiere of Avengers: Endgame.

“Well, it certainly feels like I should be paraphrasing Chris Evans’ Endgame tweet, doesn’t it? So, with that said…

“Playing this role over the last (almost) 7 years, has been an honor. To everyone in front of the camera, behind the camera and in the audience, thank you for the memories! Eternally grateful.’”

Unhappy fans have flooded the actor’s page with comments. They couldn’t believe that General Hospital will be letting Parry go after all these years.

In the past year, Shen’s Brad has been keeping a very big secret from her husband, Lucas. She didn’t tell him that they lost the baby they adopted at just a few hours old before he could meet him and that the baby they have been raising as theirs is Lucas’ grand-nephew, Jonah, Michael and Nelle’s son.

Julian has been Brad’s confidante throughout but only learnt about Wiley’s real identity only a few months ago. Both of them have been frenemies since then. Julian has now gone back to his old lifestyle because he can’t stand Brad’s presence anymore.  On Friday, Julian rigged Brad’s brakes so that if will fail and that might lead to the end of Shen Brad in Port Charles.

Although General Hospital is yet to confirm whether Brad is leaving or what happened to him? We think the character will die, and he will take the Wiley secret along with him to his grave.  Brad is not the only person who knows the Wiley secret anyway.

Parry Shen’s first major role in his acting career was in Better Luck Tomorrow, where he played the role of Ben Manibag, who was the film’s main character.

Shen was also casted in another Asian American movie, Surrogate Valentine. He was then casted in the horror film Hatchet. He also appeared in the sequels to Hatchet, Hatchet II and Hatchet III.

Now that Shen is leaving General Hospital we hope to see more of him in other movies and shows.

Umbre Is A Sleeper Drama For HBO