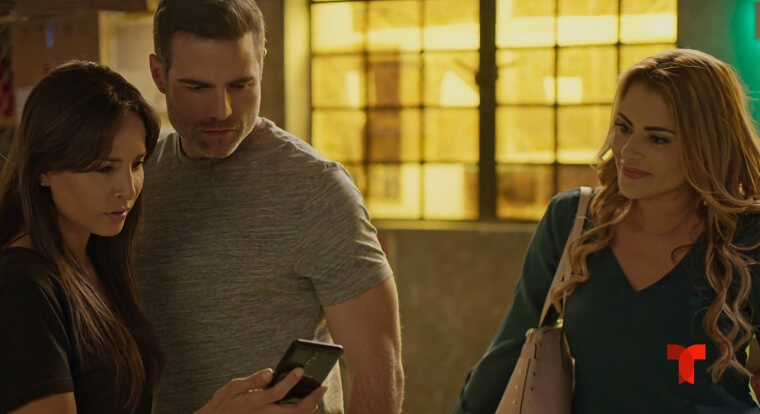 El Final del Paraíso spoilers reveal the mystery might have been solved. Online talk indicates there’s an answer to who this stranger is who summoned José Luis “Jota” Vargas (Francisco Bolívar). It’s something that fans have been wondering about, although the writers refused to give an answer yet. So, what’s going down? Here’s what you need to know.

In the Wednesday, November 27th episode, Jota arrives at the place Catalina Santana (Carmen Villalobos) and the rest of #TeamDestroyDiabla use as a hide out. He’s accompanied by Vanessa Salazar (Estefanía Gómez), who is looking very excited. She’s been working hard to help unmask Yésica “La Diabla” Beltrán (Kimberly Reyes), and nearly got blown up for her troubles. She and Jota inform Catalina they have the proof they need against their former friend. Catalina looks surprised by what she’s shown. So, what was it?

Talk online suggests this mystery woman is none other than a Diabla victim. Specifically, El Final del Paraíso spoilers indicate it’s the one Diabla stole her face from: Karla (Reyes). This is a huge mind-blower, but it’s not entirely out of the realm of possibilities. Here’s why.

Fans point to an early scene this season where Esteban Calvo (Manuel Gómez) and another Diabla employee are talking. They refer to someone that’s being held by them, and that Diabla would be furious if she learned the truth. This would mesh with the idea it’s Karla, as getting rid of the person whose face she’s wearing would be tops on her list. We’re actually surprised at the idea Diabla didn’t just do the deed herself, but we’re going to give her a pass on this one. She was, after all, recovering from a face transplant and other cosmetic surgery. It would make sense for her to task her most trusted man with this job. Still, we’re wondering what proof she demanded when the deed was done.

Secondly, it wouldn’t be out there for Calvo to disobey. He’s gotten on her bad side before. He angered her enough to kill him this season, so we can see where he might actually have thought twice about doing this if he saw a reason. There is one problem we see, though.

Before she killed him, Calvo had a couple of incidents. El Final del Paraíso spoilers reveal that two things in particular got him in huge trouble. One was when he lied about Iván Calvo (Carlos Benítez) killing the targets she’d assigned.

The other was when she learned he’d told Albeiro Marín (Fabián Ríos) something he shouldn’t have. She confronted Calvo about it right away. If he had such a damning piece of evidence that could destroy her, why didn’t he bring it up? Only he knows where this woman is hidden. Surely, he could’ve used that to blackmail her into leaving him alone. So why didn’t he? We’re not sure. All we do know is, Diabla’s days as “Valeria Montes” seem to be numbered.