‘Days of Our Lives’ Spoilers: Will Pulls The Plug On His Marriage To Sonny! 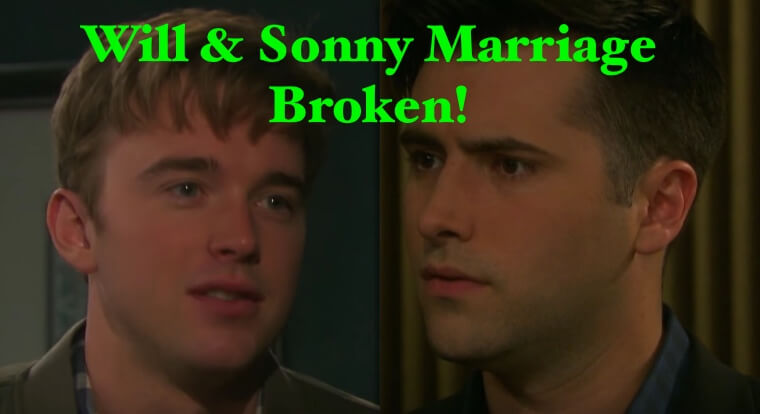 ‘Days of Our Lives’ (DOOL) spoilers indicate that fans knew that this day would come sooner or later. ‘Days of Our Lives’ spoilers tease that an incarcerated Will Horton (Chandler Massey) will stun Sonny Kiriakis (Freddie Smith) by asking him for a divorce. When Will asks Sonny to visit him in prison, that’s where he will confront him about kissing Evan. But it’s also when Will hits Sonny with this bombshell that will change things between them forever.

Chandler Massey, who plays Will Horton on the hit NBC soap, puts it this way to Soaps in Depth in an interview, “When he hears about Evan and Sonny getting close and kissing, even though it hurts, obviously, he thinks it’s a good opportunity to basically get Sonny to let him go.”

‘Days of Our Lives’ Spoilers: Will Pulls The Plug On His Marriage To Sonny

It’s a decision that Will thought long and hard about and one that but one that wasn’t made easily, though. Chandler further explains, “Will obviously harbors a lot of guilty about killing Adrienne. He has been thinking about how to move forward, and he decides that it would probably be best if everyone just sort of goes on with their lives and forgets about him.”

But is that something Sonny is willing to do? Perhaps. With that said, he’s upset, but he’s also impressed that Will had the courage to end things the way he did. Chandler also adds, “They are never going to be able to move past what Will did. You can’t really come back from this. Will is going to be locked up for a long time and he wants Sonny to be happy and he wants him to move on. He feels as long as they are married, Sonny’s not going to be able to live his life.”

‘Days of Our Lives’ airs weekdays on the ABC network. Check your local listings for times. For now, let us know what you think by leaving us a line with your thoughts in our comments section. What do you think is next for your favorite soap stars? Also, come back to Daily Soap Dish for all the latest news and updates on your favorite NBC, CBS and ABC daytime television soaps! For more royal and celeb baby news, come back to Celeb Baby Laundry.

‘The Young and the Restless’ Spoilers: Cait Fairbanks (Tessa Porter) Opens Up About Eating Disorder