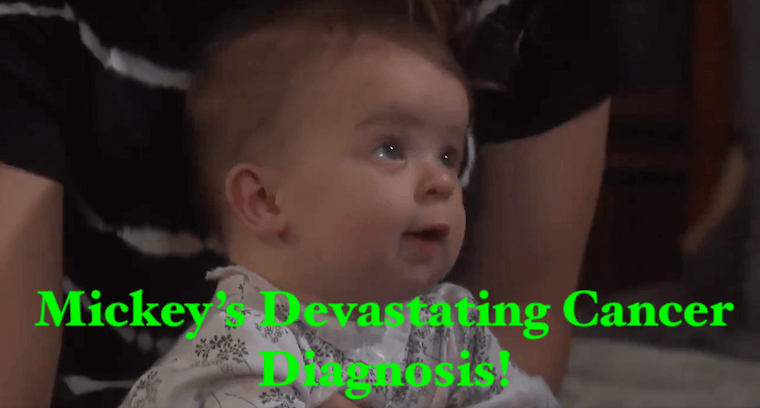 ‘Days of Our Lives’ (DOOL) Spoilers update for Friday, December 6th, 2019 indicate that Dr. Marlena Evans (Deidre Hall) is a bit concerned about Granddaughter Mickey, when she handed her back to Eric Brady (Greg Vaughan) she said that she felt a bit warm. She’ll tell Eric that it’s probably nothing but will encourage him to get little Mickey checked out anyway. Of course right now Eric is in full-on protective Daddy mode so he will head straight to the hospital with Sarah Horton (Linsey Godfrey) with little Mickey. It looks like Mickey’s battle is just beginning, though. As it turns out, she has cancer which will be a devastating blow to Sarah and Eric in the week ahead.

‘Days of Our Lives’ Spoilers: “Wait, were you even catholic?”

Gabi Hernandez (Camila Banus) and Chad DIMera (Billy Flyn) will be going head-to-head over who’s going to control DiMera enterprises. Looks like that battle may have a big pause in it though when Lani Price (Sal Stowers) runs into Eli Grant (Lamon Archey) in rome, however! Eli will get the shock of his life when he realizes that Lani’s joined a convent (Quick question – was she even catholic to begin with? How does that even work because converting to Catholicism takes awhile itself but becoming a nun… doesn’t that take seven years? Is there a fast-track you can get on in the Vatican? Somebody clear that up for me.) But it looks like they’ll have to put a pin in that conversation for now. It looks like JJ Deveraux (Casey Moss) has followed Eli to Rome in hopes of finding his mortal enemy – Kristen DiMera (Stacey Haiduk).

JJ truly believes that Kristen willfully murdered the love of his life, Haley Chen (Theia Megia), but what he doesn’t realize is that it was all a really tragic accident that happened when Kristen learned that she had lost her baby. However JJ refuses to see it that way, he’s come to Rome with one thing in mind, and that is the death of Kristen DiMera. He’ll end up pointing his gun at Kristen and it’ll be up to Lani to talk him down Wow Kristen, you sure are going to end up owing Lani one if she’s the one who ends up saving your life!

NBC ‘Days of Our Lives’ Spoilers: Someone Is Left To Die! – Who Is…

NBC ‘Days of Our Lives’ Spoilers: Why The Writers Are Evil – How…