Days of Our Lives spoilers reveal Stephen Nichols completed his first episode as Stefano DiMera. The move is controversial, as fans are upset about recasting the iconic character after the passing of Joseph Mascolo in 2016. Others expressed displeasure about the use of Steve “Patch” Johnson as the new face. So how did the first day of the change go? Here’s our perspective. 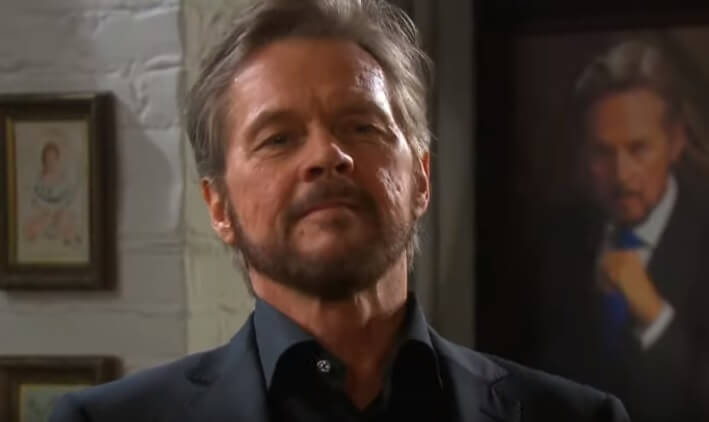 Just seeing some reaction to the rumors that Stefano’s made it clear this is a huge risk. Days of Our Lives spoilers relate Stefano is a much-loved character who is one of the great villains of soaps. We figured having an actor familiar to, and loved by, fans would be one of the only ways this would be acceptable to a big part of the fanbase. While we’re disappointed that Brandon Barash (Stefan DiMera) didn’t end up stepping into the part, we have to say that we’re sort of enjoying this. Here’s why…

Days of Our Lives spoilers: On edge

First off, watching John Black (Drake Hogestyn) and Marlena Evans (Deidre Hall) puzzling over the possibility the “S” on that card stood for Stefano. They were clearly on edge about the idea, and it led to some comedic moments. Especially John’s reaction to Abe Carver (James Reynolds) having a psychic get on the case. We’re glad the possibility of his resurrection was addressed by the pair, as it would seem a bit off for at least one of them not to consider the chance. It also helped set up the character for those of us who haven’t really been exposed to Stefano. The talk of the Phoenix let new fans know this is a character that always finds a way out. So, how’d he do?

ICYMI: Inside Salem has an exclusive interview with Head Writer Ron Carlivati to discuss everything you need to know about the big time jump twist. Then, hear the cast's live reaction from Day of Days! Link in bio. #DAYS

So far, we think Nichols is doing a good job. We think the writing is certainly making things enjoyable, for sure. Watching Stefano talk about what a thorn in his side Steve is while wearing Steve’s body is great. Even Princess Gina (Kristian Alfonso) was slightly more entertaining with an in-action Stefano by her side. She pointed out that he has now achieved the ultimate victory over this troublesome adversary—he stole his body and face.

Another great moment in the episode were the interactions between him and Gina. They walked the line between him being threatening and asserting his higher standing in their partnership, while also showing they have a real friendship. The banter between them was amusing and the kind of interaction you can only get out of old friends who make a good team. We’re looking forward to what’s next, as Stefano alluded to a perfect plan to drive John and Marlena apart. If the history and hints in this episode are any indication, it’s going to be a good one.