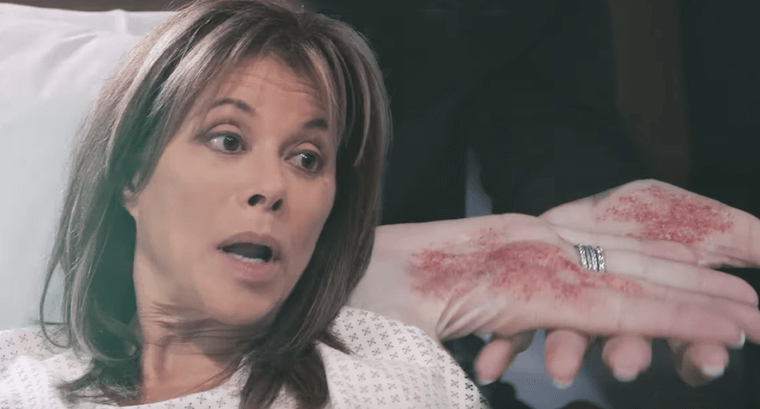 ‘General Hospital’ (GH) spoilers for Thursday, November 14 is here. It’s going to be another nail-biter for some of our favorite residents of Port Charles, as they make some very important decisions during this episode. In fact, Franco Baldwin (Roger Howarth) decides on whether he wants to stay or if he wants to go, while Kim Nero (Tamara Braun) and her fate is confirmed, too. Also, Lucas Jones (Ryan Carnes) continues to try and make sense of his life while Alexis Davis (Nancy Lee Grahn) still has no idea just how serious her situation is. Here’s what you need to know.

If Franco Baldwin can’t lead the life that he wants in Port Charles, then he’s going to go elsewhere in order to make it happen. And according to ‘General Hospital’ spoilers, that’s exactly what he decides to do, much to the dismay of his heartbroken wife, Elizabeth Webber (Rebecca Herbst) and her son, Cameron Webber (William Lipton). Franco decides that the best thing for him to do is leave town and to leave with Kim Nero (Tamara Braun) by his side. This also confirms that the episode will be the last for actress Tamara Braun, who announced that she is leaving the highly-rated soap.

Of course, not everyone is happy with this situation, but at least Monica Quartermaine (Leslie Charleson) makes an effort to be nice to Kim, knowing that she needs all of the mental health help that she can get.

Elsewhere, Ryan Carnes is still trying to decide on what to do with his life, as there are fewer and fewer people in his inner circle that he can trust. Alexis Davis, meanwhile, is feeling worse by the day, and unfortunately there isn’t one doctor at ‘General Hospital’ who can properly diagnose her!

Fans will have to tune in to General Hospital on the ABC network for all of the great drama! For now, drop us a line with your thoughts in our comments section below. And as always, come back to Daily Soap Dish for all the latest news, updates and spoilers on The Young and the Restless, The Bold and the Beautiful, General Hospital and Days of Our Lives. For more royal and celeb baby news, come back to Celeb Baby Laundry.