‘Days of Our Lives’ Spoilers: Stefano DiMera (Joseph Mascolo) Recast – What You Need To Know!

'Days of Our Lives' Spoilers: Stefano recast - who are we even kidding? 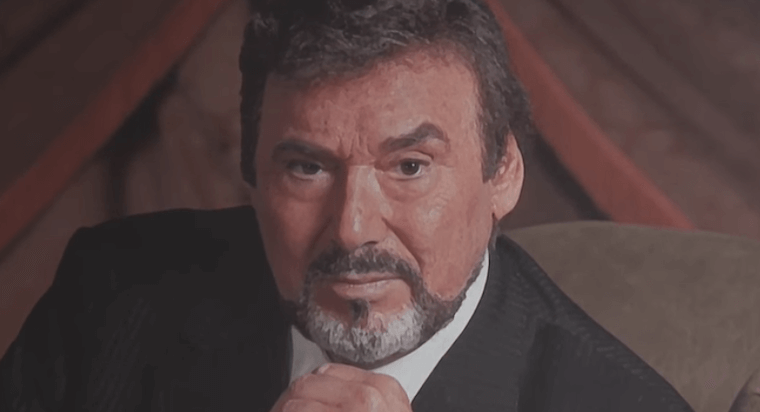 ‘Days of Our Lives’ (DOOL) Spoilers is saying that it’s been rumored that Stefano DiMera (Joseph Mascolo) may become a thing again in Salem. It seems that Dr. Wilhelm Rolf (William Utay) would try to bring him back, not by some weird necromantic means (ewww!) but rather, by injecting a microchip that had Stefano’s “essence” in it into some poor unsuspecting chump. Like he did with “Princess Gina”. No doubt that Rolf has the technology and the know-how to do it, but… the question is, would he really do it? I can see bringing back certain DiMera operatives for certain missions, but the man himself? I mean, he has… how many kids? Couldn’t one of them be the next Stefano?

‘Days of Our Lives’ Spoilers: The kids can’t pull it off

From what we’ve seen, for all the evil that Stefano did in the world, his kids certainly don’t seem to have inherited any of that particular gene. Proving that ‘evil’ is not really a genetic component after all. I mean, the man has more than his fair share of DNA floating around. There’s Tony DiMera (Thaao Penghlis), there used to be Stefan DiMera (Brandon Barash), there’s also Chad DiMera (Billy Flynn) and there’s also EJ DiMera (James Scott), there’s would’ve been Renee DuMond (Philece P. Sampler) but she was taken out of the game early and there was also Lexi Carver (Renee Jones), the point is, Stefano has a lot of genetic links floating around, but the thing is none of his kids have the capacity to carry out the evil that he did.

No, I’m not, Kristen DiMera is an adopted daughter of Stefano Dimera, Kristen’s real last name is Blake, like her brother, Peter Blake. Stefano took the Blake children and raised them as his own after their parents died. Kristen definitely has the capacity for evil, but the thing is, try as she might she simply does not share the genes of The Phoenix. Speaking of Peter Blake (Jason Brooke), where on earth is he? Apparently he disappeared after being released from jail. If anyone was shady enough to be able to carry out the things that Stefano did, I’d peg him for it. Also that would’ve been an interesting angle on the whole Jack/Jenn triangle but oh well. No one asked me.

‘Days of Our Lives’ Spoilers: Barring his kids, how could the Phoenix rise again?

Excellent question. It would be interesting if Dr. Wilhelm Rolf decided to kidnap John Black (Drake Hogestyn) or Roman Brady (Josh Taylor) and inject them full of Eau de Stefano, in fact it would be kind of poetic, actually. Stefano’s former enemies being forced to essentially be his puppet but I don’t think that’s going to be a thing. After all, would require too much effort and arguably once the microchip is injected it can’t be reversed. We need somebody new with fresh blood who doesn’t have that much of a history as a bad guy but also has the capacity to do super shady things. In the current DOOL-verse, if we were going to go with a guy it could be…

I say this because Ben is a former serial killer so he’s done shady things before, he’s not opposed to doing things that are inherently wrong, including murdering people if he has to. Just look at how he’s recently looked at the problem of sister, Jordan Ridgeway (Chrishell Hartley), family she may be but that doesn’t exempt her from the predatory eye he has. He may love his sweet, innocent nephew, David Ridgeway, but he’s not above taking his Mother out of this world if it means that he can have a moment’s peace. That… sounds like a Stefano candidate to me. But what if Dr. Rolf wanted someone different, someone who had the capacity for evil but maybe without the brutal killing instinct? Someone with more cunning, and someone who definitely had a legit stake in the DiMera clan?

‘Days of Our Lives’ Spoilers: Gabi DiMera: Spread your wings!

Scheming Gabi Hernandez-DiMera (Camila Banus) would be perfect to take up the mantle of the Phoneix. I say this because she has got all the cunning, scheming smarts of Stefano along with brutal killing instinct, but like a Lioness, she always strikes with precision and finesse. Just look at how she handled the whole Julie Williams (Susan Seaforth Hayes) thing recently? When Stefan died, she reluctantly gave Julie his heart, but not without strings. She effectively booby-trapped the gift of life and made Lani Price (Sal Stowers) pay dearly for the pain she had caused her by forcing her to dump Eli Grant (Lamon Archey) at the altar. If that isn’t a play directly out of Stefano’s handbook? I don’t know what is! If Dr. Rolf was intent on using someone of the male persuasion and he wanted someone who had been in the mafia before, he could definitely go with an outlying third option which would be strange but would also make sense in an odd way, hear me out!

‘Days of Our Lives’ Spoilers: Xander Cook: Will this egg even hatch?

Xander Cook (Paul Telfel) is a former mafia hitman who is trying to turn his life around all for the love of one woman, Sarah Horton (Linsey Godfrey), however that storyline isn’t heating up quite the way that love stories normally do on soaps and it’s taking Xander a bit of time to completely turn his life around. Before he does a complete heel-face-turn, I could see Dr. Rolf seeing his potential, grabbing him, wiping him of everything that made him Xander and make him into Stefano instead. Since he kind of doesn’t quite fit in anywhere in Salem, this could be a perfect turnaround for his character, albeit it may not be the one that some of us would want. Also now Stefano 2.0. Would have that trademark ‘sexy british accent’. So far the Stefano recast is just a rumor, to truly know what’s going to happen next we’ll just have to stay tuned!!!

‘Bold and the Beautiful’ Spoilers: Is Brooke Getting Back With Bill After Ridge Consummates Steamy Affair With Shauna?