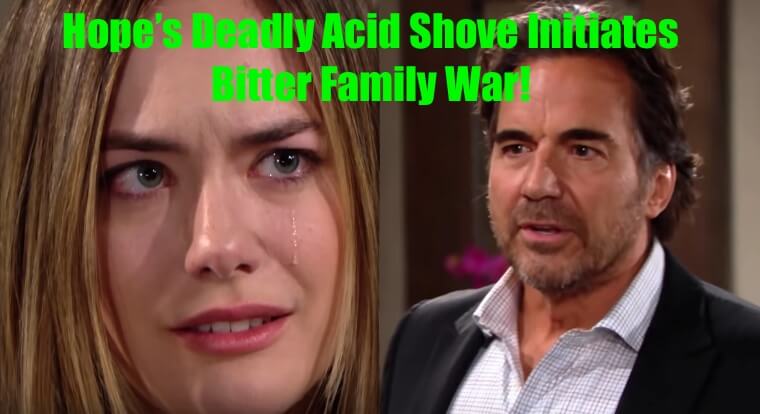 ‘Bold and the Beautiful’ (B&B) spoilers indicate that Hope Logan (Annika Noelle) & Brooke Forrester (Katherine Kelly Lang) are about to have a lot of to do about Thomas Forrester’s (Matthew Atkinson) purported death. Ridge Forrester (Thorsten Kaye) is going to be one furious daddy. This is going to escalate to unheard of levels of nasty, and will most likely lead to one of the nastiest breakups we have ever witnessed on Bold. And when that happens, Shauna Fulton (Denise Richards) will be there, licking her chops. Here’s what you need to know.

A few weeks ago, Ridge went to the Bikini Bar to down a few drinks after getting into an ugly fight with Brooke Logan (Katherine Kelly Lang). Little did he know that he was about to go to bed with a hot single mom from the Las Vegas desert. And yes, things were certainly getting hot in more ways than one.

Thorsten Kaye, who plays Ridge Forrester on the hit CBS soap, told Soap Opera Digest in an interview, “I blame the Bikini Bar for that; There’s got to be a lawsuit in there somewhere! This is not the first time that I thought about waking up next to Denise Richards [Shauna]. It didn’t seem weird to me at all because I’ve been there before in my mind. But yeah, that was a little weird for Ridge, because it’s awful when you wake up and the mind takes a minute to catch up with the rest of your body. That’s kind of what it is. He remembers pieces of it, but he doesn’t remember her being anywhere near him.”

With that said, ‘Bold and the Beautiful’ spoilers tease that Ridge is about to find out that his son has gone missing during the week of November 11 to November 15 on Bold & Beautiful. Brooke & Hope are going to be scrambling since it will look like Hope planned everything out to murder Thomas on purpose. Getting him to sign the adoption papers, and then him taking an unexpected plunge into the green ooze that was the giant hydrofluoric acid vat, will seem a little too… convenient. Especially considering the history between Hope and Thomas, as well as Brooke and Thomas.

B&B fans will recall that Brooke Logan recently pushed Thomas Forrester off a cliff to save her daughter Hope. Well, at least that’s what she said. Some fans have pointed out that Brooke didn’t necessarily have to push Thomas, and that she might have put more force into than necessary which would equal the shove as a subtle murder attempt. One way or another, things will look way too convenient this time around. For a relationship that was already strained after Brooke’s shove and subsequent outcasting of Thomas, this could surely prove to be the last straw. And when that straw break the back of the Bridge camel’s back, Shauna Fulton will be sitting there, waiting, smirking…

CBS ‘The Bold and the Beautiful’ Spoilers: Cast Joins Denise Richards On…

2020 Daytime Emmy Awards: Soap Stars To Accept Their Awards From Their Living Rooms