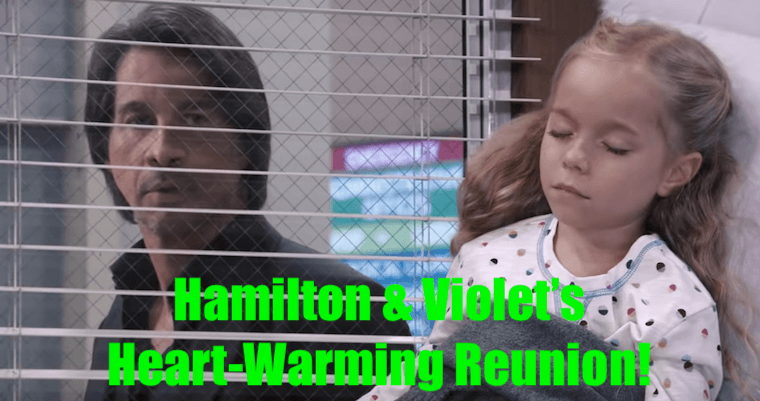 ‘General Hospital’ (GH) Spoilers for October 23rd 2019 indicate that Carly Corinthos (Laura Wright) will tell Bobbie Spencer (Jacklyn Zeman) that she feels ready for anything that life throws at her. I guess so, after successfully giving birth to a newborn baby with spina-bifida who’s own surgery went fantastically well. She maintains that life can just bring it on because she’s well prepared to face every demon and give her little girl the best life possible.

Speaking of the newest addition to the Corinthos family, she’ll get a chance to meet her big sister, Avery Corinthos! (Ava and Grace Scarola) And there’ll be plenty of warm, fuzzy moments ahead but Michael Corinthos (Chad Duell) will notice that there’s been quite the change in Josslyn Jacks (Eden McCoy) lately.

He’s not the only one who notices it. Trina Robinson (Sydney Mikaela) will notice something strange is going on as well and she’ll call Joss out for not being there for Cameron Webber (William Lipton) like he was there for her while Oscar Nero Quartermaine (Garren Stitt) was dying. She accused Joss of thinking that emotional support was a one-way street. Joss is definitely pulling away from her loved ones and Michael seems to be noticing the same thing – will he call her out on it as Trina did or will he take a more gentle approach?

Dr. Hamilton Finn (Michael Easton) will be in shock from Hayden Barnes’ revelation. As it turns out the very sick patient that he’s just been called in to the hospital to treat is her daughter! Excuse me, their daughter. Little Violet Finn (Jophielle Love) has become majorly ill, and while Finn will definitely chew her out over keeping this a secret from him, ultimately, it will be up to him to save their daughter’s life. They can has things out later, right now the most important thing is making sure that little violet is okay.

Speaking of quality parenting time, Jason Morgan (Steve Burton) will be spending some time with Danny Morgan (Peter Fasullo). Poor little Danny is obviously upset about all the trouble his Mom, Sam McCall (Kelly Monaco) is in, but Jason will do his best to shield his son from the awful truth as much as possible. He’ll offer reassurance as he tries to keep little Danny’s spirits up.

‘General Hospital’ Spoilers: Could Cam be an unreliable witness?

Meanwhile, Franco Baldwin’s (Roger Howarth) trial will get underway. Look like Cameron is first up at bat on the witness stand and he will tell the harrowing tale of how he would’ve been the one with Drew Cain’s memories right now if it hadn’t been for Franco. Everyone knows that Cameron was sedated for the memory mapping procedure and that Scotty Baldwin (Kin Shriner) was going to try and keep that little detail out of court, but it doesn’t look like legal eagle Martin Gray (Michael E. Knight) will let that happen!

Jordan Ashford (Briana Nicole Henry) will also sing Franco’s praises, she’ll laud over the fact that he helped the PCPD take down Ryan Chamberlain (Jon Lindstrom) back when he was actually Franco and now thanks to him a serial killer is behind bars. Elizabeth Webber (Rebecca Herbst) will also take the stand and express her regret that while these circumstances are terribly painful for former bestie Dr. Kim Nero (Tamara Braun), Franco is her husband and not Kim’s. She is acting in what she feels is Franco’s best interest and what she feels his wishes would have been.

Martin however will maintain that Franco does not exist anymore and that the only person standing in that courtroom is Drew Cain. Considering that he convinced him to wear a military dress uniform in order to ‘prepare for battle’ so to speak, you can see where the theatrics would be convincing enough to come into play. However, this is just day one, Franco’s trial is just beginning and we haven’t seen the full circus act yet. Stay tuned!!!