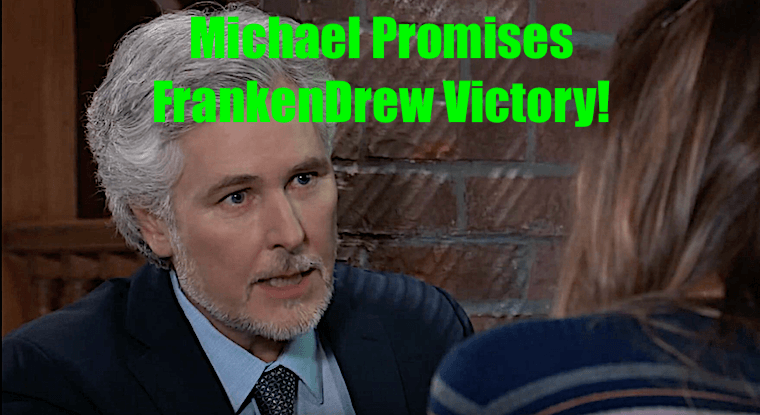 ‘General Hospital’ (GH) Spoilers promise a big legal fight ahead over Franco, AKA Frankendrew (Roger Howarth), find Maxie Jones (Kirsten Storms) reeling from the Sasha Gilmore (Sofia Mattsson) reveal, and has Damian Spinelli (Bradford Anderson) working his magic. If you missed it, let’s catch up on some ‘General Hospital’ spoilers.

Maxie still can’t get over what happened at the Cassadine/Reeves non-wedding. She has been trying to get in touch with Nina Reeves (Cynthia Watros), but is not having luck. She and Peter August (Wes Ramsey) talk about it, and both feel bad they were right. Maxie can’t believe that Valentin Cassadine (James Patrick Stuart) would lie to Nina like that. Maxie goes on about how glad she is there are no secrets between her and Peter, and how great a person he is. This seems to make Peter feel like garbage, and the telegraphing is obvious as to what’s going to happen eventually. Especially when Maxie jokingly warns him not to screw up.

While they talk, Jason Morgan (Steve Burton) approaches and starts asking questions about that night at the docks. He, Sam McCall (Kelly Monaco), and Sonny Corinthos (Maurice Bernard) are positive that with all the evidence they have, Peter has something to do with this whole Shiloh (Coby Ryan McLaughlin) mess. Peter explains he was, in fact, carrying money. It was for an apartment. Jason seems doubtful, but Maxie backs Peter up. Maxie is clearly a bit suspicious, as Jason never acts out of pure curiosity.

At the PCPD, Spinelli is ready to prove Sam’s innocence, but there’s a problem. Spinelli wants to use his own equipment, but Jordan Ashford (Brianna Nicole Henry) believes that the PCPD’s resources will be just fine. She’s doing enough by giving him the tape. His comparing using their stuff to trying to explore the stars on Wright Brother’s tech doesn’t help. She leaves him to it, but has two others sitting in the room with him, a tech guy and a guard. They’re to tell her if he appears to alter the recording in any way.

We think her professional pride may be hurting just a bit. Her case is practically dead in the water, even without proving the recording a fake. Robert Scorpio (Tristan Rogers) had just come from speaking with both the provider of said tape, and the witness. Neither one is going to make it on the stand.

Eventually, Spinelli, having no luck disproving the tape, decides to do the opposite. He sets out to prove it is authentic, and can’t. There’s an irregularity in the recording that basically means this will not be good evidence. Sam is called to the station and told that Jordan will be getting the charges dropped.

In other news, Elizabeth Webber (Rebecca Herbst) and Scott Baldwin (Kin Shriner) are strategizing their case. Cameron Webber (William Lipton) volunteers to testify on Franco’s behalf, which Scott likes. They go over the testimony, trying to make the save Franco pulled as dramatic as possible. He just doesn’t want him to admit to being drugged at the time.

In addition, Elizabeth also is willing to use Kim Nero (Tamara Braun) begging Drew Cain (Billy Miller) for a baby after Oscar Nero’s (Garren Stitt) death against her, if needed.

Elsewhere, Kim is willing to fight on her supposed man’s behalf. She hires Martin Grey (Michael E. Knight) to represent Frankendrew. He believes this is a clear-cut identity case that can be precedent-setting. He is anxious to take it on. Kim takes him to meet Frankendrew, and Martin is pleased to learn of Drew Cain’s (Billy Miller) military awards. He thinks those need to be displayed and they need to make a lot of press noise. Kim and Frankendrew are just anxious to be done with this and be able to live their lives together.

Finally, Monica Quartermaine (Leslie Charleson) gets some bad news. They’ve located the site, as well as the recordings from the plane. All indications show that the plane had an issue and crashed, leaving no survivors. He’s going to be declared dead in absentia.

‘Days of Our Lives’ Spoilers: Stefan Not Dead, Impostor Shot In His Place – Tyler Christopher To Return As Stefan DiMera After Barash’s Exit?