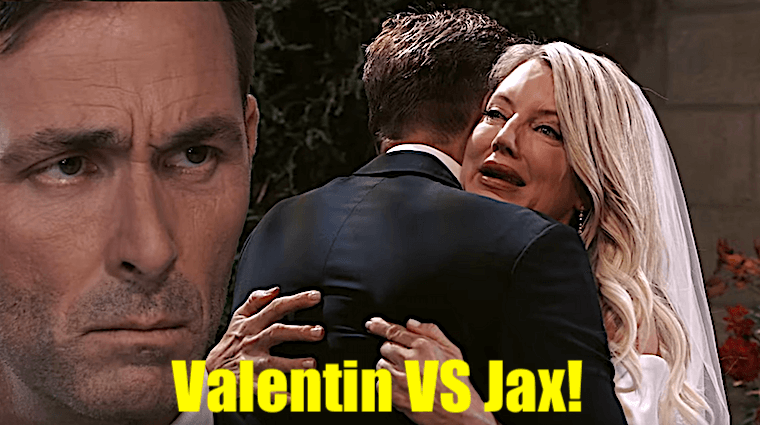 As you might remember, Nina Reeves (Cynthia Watros) was up in arms Monday over Lulu Spencer (Emme Rylan) claiming Sasha Gilmore (Sofia Mattsson) is not her daughter. A huge fight ensues where all kinds of accusations fly. Nina thinks she’s being a jealous, spiteful woman who can’t stand Nina’s relationship with Charlotte Cassadine (Scarlett Fernandez). She begs Sasha to end this once and for all by telling Lulu she’s wrong. Sasha can’t.

She tearfully confesses the truth and swears that she needed money and just thought she’d be stopping in briefly, and then she’d be gone. She promises that everything but her parentage was the truth. Nina doesn’t think that’s much of a comfort. She is furious, and it’s actually awesome to see the rage Watros conveys.
Valentin Cassadine (James Patrick Stuart) tries to explain, but Nina isn’t in the mood. She demands that Valentin takes his hand off her and stays away. She can’t believe he lied to her like that.

Once Nina leaves the church, she runs into Jasper Jacks (Ingo Rademacher), who was arriving late to the ceremony. She’s inconsolable and he offers to bring her to his place.

There, she tells him everything that happened. Jax clearly feels bad for her and offers comfort. And by comfort, we mean scotch. He says that he takes a drink of it when life really knocks him down. She takes the glass and gazes out the window.

Back in the church, no one can believe what they’ve heard. They’re also mad. Sasha Gilmore, obviously gets hate for her lie. Michael Corinthos (Chad Duell) is in the hotseat because he admits to having known the truth, Valentin is looked at as the puppet master of this thing, and Maxie Jones (Kirsten Storms) wonders if Lulu misunderstood the part about Liesl Obrecht (Kathleen Gati) being in on it. Lulu swears she heard what she heard, Liesl denies all, and Michael and Sasha say they were waiting for the right time to tell the truth. Valentin congratulate Lulu on getting revenge for her brother at Nina’s expense.

‘General Hospital’ spoilers: This isn’t over

Curtis Ashford (Donnell Turner) is angry at Valentin. He can’t believe that his efforts to make sure Valentin wasn’t lying about Sasha were for nothing. He and Jordan Ashford (Brianna Nicole Henry) say that they’re going to be looking into this whole situation and see where it takes things.

Valentin tells Lulu she just took away Charlotte’s stepmother. Besides that, the poor kid is waiting to return to a wedding that won’t happen. He swears that Lulu is going to regret breaking Nina’s heart like that.

Elsewhere, Willow and Harrison Chase (Josh Swickard) happen upon Brad, who is having a meal with Wiley. They stop to chat, and eventually are left to watch Wiley. Brad had gotten a phone call from Nelle Benson (Chloe Lanier), who wanted to see him right now.

When Chase also gets a call, Willow is left alone with her supposed son. She and Chase had spoken briefly about if she was changing her mind about Wiley’s situation now that Shiloh (Coby Ryan McLaughlin) is gone. She thinks on that as she waits for Chase to return. She even talks it over with Wiley, eventually deciding that she could never take him away from the life and people he loves. It doesn’t matter that she wants to be able to read to him and kiss his boo boos. When she tells Chase this, he thinks she’s amazing.

Speaking of that phone call, Nelle has a couple of requests and a confession. She admits to Bradley Cooper that she almost spilled the beans to Michael once. He is shocked. She says she didn’t end up doing it because of Michael getting a picture of Sasha Gilmore and Wiley during their visit. She wants him to make sure that Sasha is never allowed to watch him, or hold him. Brad argues that’s not exactly easy, but she tells him to figure it out.

Her other request is for him to write on her behalf for the parole hearing. She wants him to swear that her actions were the result of hormonal issues at the time, and that he’d noticed a change in her. Brad just can’t get away from being blackmailed. Ah, the web he weaved…

Finally, Ava and Ryan visit today. Ava had been at Pentonville to beg the warden to stop Ryan from writing. Alexis Davis (Nancy Lee Grahn) thought the warden taking pity would be her only hope. Unfortunately, she’s denied. Ryan is glad, because writing her is the only thing keeping him alive.

Furthermore, he thinks she’s kidding herself if she thinks she is better away from him. The way Ryan sees it, she was thriving under his so-called therapy and looked happy and healthy. Now, she looks like the walking dead. He thinks that she can only heal if she’ll accept having Ryan in her life. Ava is stubborn and refuses to accept that. Instead, she leaves the letters behind and takes off.

‘Days of Our Lives’ Spoilers: Ben Returns To Murderous Ways!

‘Bold and the Beautiful’ Spoilers: Will Wyatt Wind Up Flo After Selfless Kidney Donation Instead Of Sally?