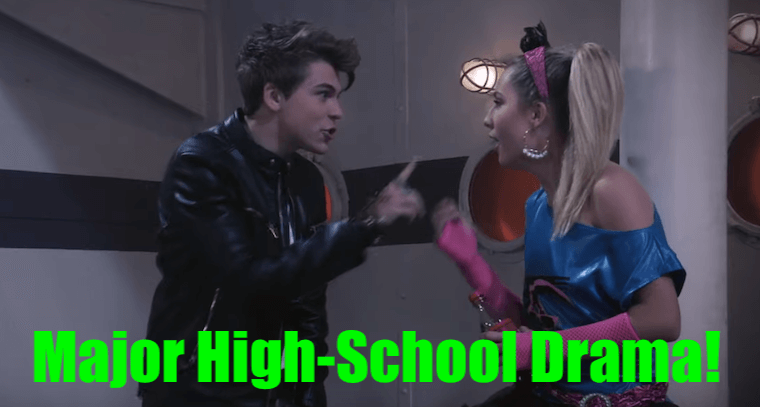 ‘General Hospital’ (GH) Spoilers for October 31st 2019 indicate that Dr. Hamilton Finn (Michael Easton) is starting to bond with his little girl, Violet Finn (Jophielle Love) they broke the ice by having a sweet little conversation about Roxy. Later, Finn will ask Hayden Barnes (Rebecca Budig) what sort of role he will play in little Violet’s life, but that’s really up to Finn. Hayden will agree to let him play Daddy and for the next couple of weeks we’ll get to see some adorable little Father-Daughter bonding scenes between the two of them. Awww!! Only thing is, how is Anna Devane (Finola Hughes) going to feel about all of this? Or did we just forget she existed altogether? Just wondering!

Jordan Ashford (Briana Nicole Henry) is worried that son TJ Ashford (Tahj Bellow) is taking things with Molly Lansing-Davis (Haley Pullos) at a breakneck speed. He’s ready to move forward and take the next step in their relationship. However, Curtis Ashford (Donnell Turner) will tell her that this is far from a done deal, after all, we don’t know how Molly feels yet. Guys propose to girls all the time, and these two are still young and lots of things can happen between a proposal and a wedding. (Also there’s no guarantee that she’ll even say yes, stop being such a Mom, Jordan!)

‘General Hospital’ Spoilers: Don’t trick Ava unless you want a trick of your own!

Ava Jerome (Maura West) will decide to leave the party early and head back to her gallery. However just as she feels like things are starting to go in her favor, Halloween has another horror set up for her. The masked man that was previously watching her (even in the shower, ew!) has followed her to the gallery and will surprise her there. Only, little does he realize that she has a surprise for him too – A GUN! We’ll see her whip that pistol out and start waving it around, and honestly if Nikolas Cassadine (last played by Nick Stabille) is stupid enough to try and pull the masked intruder crap on her after what all Ava has been through, then he deserves whatever he gets. (Besides, as observant as he’s being, it wouldn’t have killed him to pick up a newspaper or, I don’t know, AN ISSUE OF CRIMSON LATELY!)

‘General Hospital’ Spoilers: Trina confesses to Dev, Joss and Cam are going to get busted

Back at the Haunted Star at the high school dance, Trina Robinson (Sydney Mikayla) will confess her feelings to Dev Cerci (Ashton Arbab) and tell him that all she sees is him. The thing is, he’s way more into Josslyn Jacks (Eden McCoy) so I think she’s setting herself up for heartache. Ugh, and they had such good chemistry too!

Meanwhile, Josslyn seems intent on getting into trouble with Cameron Webber (William Lipton), they’ll sneak around playing at solving a mystery and Cam will have stolen some alchohol which, by the way, isn’t going to look very good to a judge because you’re still on probation, Cameron! Is this kid trying to get locked up or what? Lulu Spencer (Emme Rylan) and Dustin Phillips (Mark Lawson) will be on-hand to bust these two eventually.

Laura Webber (Genie Francis) will use this excuse to keep searching for the codicil. She’ll tell Jasper Jacks (Ingo Rademacher) that she has to be the one to bring Valentin Cassadine (James Patrick Stuart) down, not anybody else, just her! But little does she know that Nina Reeves (Cynthia Watros) has her own plan concocted to bring Valentin to his knees. She’ll be ready to go round 2 with former fake daughter Sasha Gimore (Sofia Mattson), which will prompt Willow Tait (Katelyn MacMullen) to stand up which I personally can’t wait for because I always like a good reading from Willow when it comes to Nina. It’s going to be really funny later when its revealed that Willow is her actual daughter and this is what she actually thinks of her birthmom.

‘General Hospital’ Spoilers: And the identity of Sam McCall’s cellmate is…

While all this is going on, Dr. Neil Byrne (Joe Flanigan) will pay Alexis Davis (Nancy Lee Grahn) a visit over at GH, where they will bond after he makes a confession. Awww! Finally? Finally! Speaking of finally, we’ll meet Sam McCall’s (Kelly Monaco) new cellmate, who’ll turn out to be none other than Cassandra Pierce (Jessica Tuck), is this going to end well? Doesn’t look like it. Stay tuned!