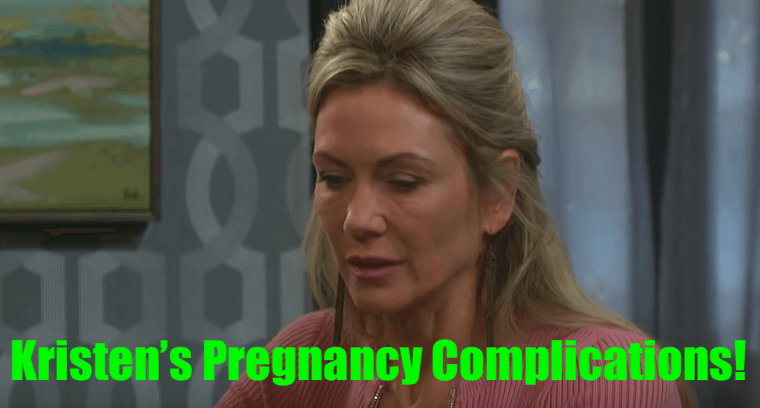 ‘Days of Our Lives’ (DOOL) spoilers indicate that pregnancy complications might be ahead for Kristen DiMera (Stacy Haiduk). After trying to come up with a rather complicated plan with Dr. Rolf (William Utay), Kristen will discover that she’s in fact pregnant and with none other than Brady Black’s baby. Here’s what you need to know.

If there’s something that we already know about Kristen DiMera, it’s that she’s a manipulative, conniving and deceiving woman who ran around Salem pretending to be Nicole Walker (Arianne Zucker). Simply put, this woman is capable of anything so it’s no wonder that her plan to steal Sarah Horton’s (Linsey Godfrey) fetus and implant it into her own body didn’t surprise many people. After all, this isn’t the first time she’s thought of it.

And while being pregnant is certainly a shock for her, it might also turn into a huge nightmare down the road, too. Because let’s face it, Kristen DiMera is no spring chicken. Her age is going to definitely be a factor in this. She’s also someone who has a rather stressful lifestyle, which certainly won’t be good for the baby, either. The stress of always having to manipulate other people will get to her sooner rather than later.

‘Days of Our Lives’ spoilers tease that Kristen DiMera’s pregnancy is going to be anything but pleasant or easy. Will she end up losing her baby? Or will things get so complicated that she might end up putting her life at risk? The possibilities are definitely strong. Don’t count on anyone in Salem to throw Kristen DiMera a baby shower anytime in the near future. They will be wanting to throw her out of town, instead! Things are going to be getting pretty dramatic very soon.

‘Young and the Restless’ Spoilers: Undeniable Attraction – Kyle & Summer Tension At Work Too Hot To Ignore, Skyler Flirts With Temptation!