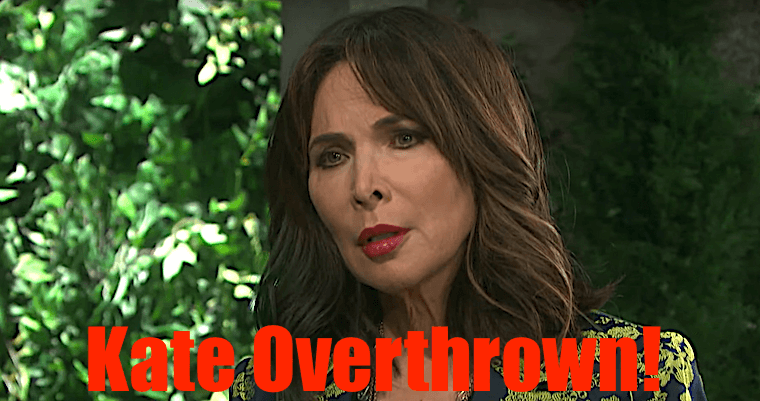 ‘Days of Our Lives’ (DOOL) spoilers indicate that Kate DiMera (Lauren Koslow) is out of a job, Anna DiMera (Leanne Hunley) gets an unpleasant surprise, and Xander Cook is having second thoughts. There’s also some more weird behavior from Hope Brady (Kristian Alfonso) and more meddling from Marlena Evans (Deidre Hall). If you missed it, let’s get to the ‘Days of Our Lives’ recap.

‘Days of Our Lives’ spoilers: Prehistoric

Anna offends Tony DiMera’s (Thaao Penghlis) manly sensibilities when she asks him to put the ring she got before on her finger. When he refuses, Anna worries that means he doesn’t want her. Tony explains it’s not that. He wants to be the breadwinner here.

Besides that, he doesn’t see much good coming from placing a ring she bought to trick him into thinking she was marrying another man on her finger. We can’t say we disagree. It is kind of tacky. Of course, this is the same town where Sarah Horton (Linsey Godfrey) slept with Eric Brady (Greg Vaughan) while still wearing her own wedding ring. Must be a thing there. Anyway, he insists on getting one himself.

‘Days of Our Lives’ spoilers: The least I can do

With no use for the ring, Anna decides to give it to Roman Brady (Josh Taylor). She tells him to go ahead and sell it. She figures after everything he did for her, it’s the least she can do in return. Roman just seems happy that the whole mess is settled and she and Tony are back together.

‘Days of Our Lives’ spoilers: Offer

Speaking of Tony DiMera, his money worries might be solved. He was looking for a job, and one basically falls in his lap. He is contacted about taking the CEO position of DiMera following Kate’s ordeal. Wow. It’s like there’s a revolving door leading into the CEO office of that company. If this were a real business, the stock holders would be revolting right now. There’s another reason this move seems inexplicable, but more on that in a sec. Hmm. Maybe the board chairman position is the one that needs changing…

‘Days of Our Lives’ spoilers: Over my dead body

Kate, of course, takes the news well when Tony drops by to talk to her. She can’t even with the idea that she’s being replaced and said it’ll happen over her dead body. She did literally dig herself out of a grave and drag her bleeding out self to a hospital to get the shaft.

Tony doesn’t seem concerned. Kate is even more annoyed and points out that most of his resume was compiled by Andre DiMera (Penghlis) while he was pretending to be Tony. He’s unqualified. Wow. Yeah, that is another outstanding decision. Why haven’t they gone under yet? Anna doesn’t seem thrilled later when Tony breaks the news to her.

Elsewhere, Eric and Nicole Walker (Adrianne Zucker) are about to have sex when a knock sounds on the door. Marlena’s there. They’re about to ignore it until Eric realizes that she knows where he hides the key and they hear the door unlocking. Marlena ends up walking in on Eric putting a robe over Nicole. It’s totally awkward, and not as funny as when something like that happened over on ‘General Hospital’. Marlena is about to leave, but Nicole insists that she stay and have some of the cake Marlena brought with them.

While Nicole Walker excuses herself to change into something not comfortable, Marlena starts meddling again regarding his recent relationship with Sarah and his sudden return to Nicole. She’s surprised to learn that they thought for a second Sarah was pregnant, and this leads to more meddling. More things that she probably shouldn’t be saying that Nicole obviously overhears.

Nicole steps in and Marlena decides to leave. Almost as soon as she’s gone, Nicole starts worrying and asking Eric about what would’ve happened had Sarah been pregnant. She’s worried he’d leave her, but he says that isn’t the case. He loves Sarah, but not the way he loved her.

Meanwhile, Xander is busy striking a deal with Dr. Wilhelm Rolf (William Utay). After having a couple of fantasy sequences about how Sarah would surely stay if the pregnancy came out—and hook up with him—he is all ready to deal. All Rolf wants, however, is a lab. He was kicked out of the last one and needs to do some work still. Xander is worried about what that work is, but eventually goes along. His plan is for Rolf to claim he came across the information will treating Kristen DiMera (Stacy Haiduk) at Casa Kiriakis.

Later, he starts thinking over the whole situation again. This time, he pictures Sarah blaming him for Eric finding out and getting her stuck in town. She says she’ll never forgive him. That makes Xander rethink his scheme and he calls Rolf to cancel the whole thing. Unfortunately, he might just be too late. Rolf has already knocked on the door and is greeted by Nicole.

Also today, Hope continues to be spacey and confused about what’s going on with her. She does seem to remember Rolf talking to her in the chapel and even looks at him odd at one point. He doesn’t get busted yet, though. She thanks for him finding the rosary and tells Marlena and John Black (Drake Hogestyn) that she has decided not to have dinner with them. She’d rather go home and sleep. They appear worried about her, but she tries to say she’s fine.