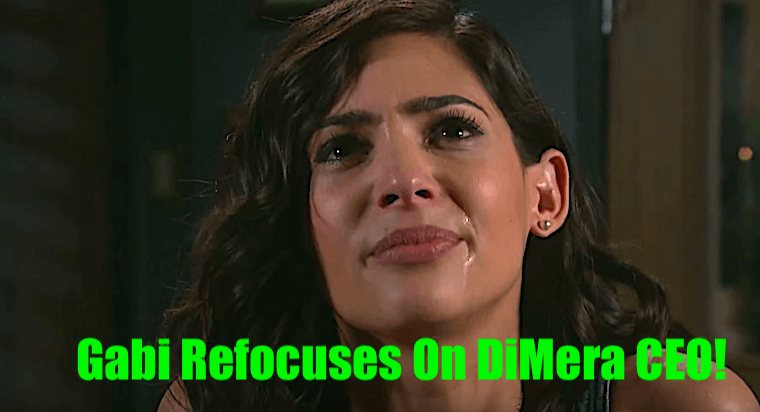 ‘Days of Our Lives’ (DOOL) spoilers indicate that Kate Dimera (Lauren Koslow) is angry, Julie Williams (Susan Seaforth Hayes) is grateful, and Gabi DiMera (Camila Banus) is on a mission. There’s also a change of heart for Jack Deveraux (Matthew Ashford) and more weird behavior from Hope Brady (Kristian Alfonso). If you missed it, let’s get to your ‘Days of Our Lives’ recap.

‘Days of Our Lives’ spoilers: Fighting back

Kate is worried about Gabi, so she stops by the DiMera mansion to see how she’s doing. Gabi is a mess, lying on the bed with Stefan DiMera’s (Brandon Barash) jacket. Kate’s refusal to go away forces her up.

When she lets Kate in, Gabi ends up lashing out at her, blaming her for Stefan’s death. Specifically, her and her war with Vivian Alamain (Robin Strasser). Kate’s understanding, and Gabi quickly realizes that she’s being unfair. She apologizes and they end up talking about what happens next. Kate lets her know she may be leaving for Titan after having her job ripped out from under her. Gabi is upset, and asks Kate not to leave her alone at DiMera.

Kate points out that she hasn’t made up her mind yet, but she actually thinks Gabi should try to get back on top. Gabi remembers a bunch of projects that Stefan had pending and thinks that she needs to honor him by seeing his dreams through. Kate thinks that’s a good idea. She urges Gabi to study up and blow Wei Shin (Michael Hagiwara) away.

‘Days of Our Lives’ spoilers: Gratitude

While Gabi DiMera is busy diving into Stefan’s files, Julie has woken up from surgery. When she learns that Gabi gave her Stefan’s heart, she is shocked. She can’t believe that Gabi would do this after all the animosity between them, but she’s grateful. So much so, she has Doug Williams (Bill Hayes) give her his phone so she can call Gabi. She tells Gabi she learned what happened and would like to speak with her in person.

‘Days of Our Lives’ spoilers: In her face

That decision (and Gabi’s arrival) couldn’t come at a worse time. Gabi ends up overhearing Lani Price (Sal Stowers) and Eli Grant (Lamon Archey) talking about their upcoming wedding. Julie had insisted that they keep on schedule, regardless of whether she is well enough to attend or not. The pair had fought her on it, but they ultimately give in. Lani and Eli had just been talking about how perfect things when Gabi interrupts.

She, obviously, isn’t very joyful about this. She reminds them that while they’re planning a wedding, she will be planning a funeral.

Gabi is just about to head over to Julie’s room when Kayla Brady (Mary Beth Evans) approaches the group. She does not look happy. When she hears Gabi saying she’s heading to Julie’s room, Kayla says she doesn’t think that is a good idea. She apparently has some bad news after some tests on Julie.

‘Days of Our Lives’ spoilers: Change of heart

Jack is trying to make amends for all his actions while he had no memory. In particular, he wants to make things up for Abe Carver (James Reynolds) after the way he treated him. His idea is to resign immediately as mayor so Abe can step in. Abe points out it doesn’t work that way, but Jack disagrees. In the charter, there’s a provision for the council to appoint someone in the event a mayor quits or can’t fulfill his duties. Jack offers to plead Abe’s case, and Abe is grateful for that.

Finally, Hope is still acting really spacey. She’s acting strange after learning that Julie’s woken up, and she snaps at Kate later when Kate comes across her sitting on a bench.

Besides all that, Hope is also getting weird pains in her neck. She assumes it’s from sleeping wrong, but after a few times, she wonders what is wrong with her.