‘Days of Our Lives’ Spoilers: Chabby In Paris – What Happened To Chad and Abby DiMera? 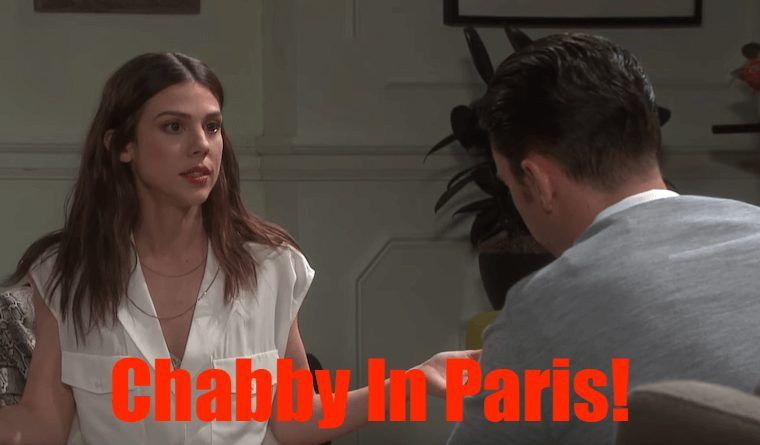 ‘Days of Our Lives’ spoilers reveal that NBC and the ‘Days’ team has done something a bit different. After Billy Flynn and Kate Mansi (Chad and Abby DiMera) recently departed the main series, their story kept going through the website and ‘Days of Our Lives’ app. Here’s what you need to know.

‘Days of Our Lives’ spoilers: Welcome to Paris

In a clear effort to diversify and stay relevant in an increasingly tough soap world in the digital age, a new show was born. Chad & Abby in Paris follows the two characters in a series of short webisodes. The couple faces a variety of challenges in setting up a new life overseas.

‘Days of Our Lives’ spoilers: Trouble in Paris

Most of the action on the show centers around the already floundering marriage between Chad and Abby. Only a short time after reuniting, Abby is now feeling neglected and alone while Chad has to pull a lot of long hours.

Complicating things even more is Austin Reed (Austin Peck) and Juliet (Rachele Schank). Autstin, obviously is known to ‘Days’ fans. He shows up following the breakdown of his marriage to Carrie Brady (Christie Clark), leaning on her shoulder. At one point, he kisses her and leaves Abby reeling. She’s not that kind of girl now, and devoted to Chad regardless of their problems.

As for Juliet, she’s a co-worker at DiMera that is intent on destroying #Chabby. She’s got a mystery conspirator that we don’t learn the identity of in Chapter 1 of the series.

‘Days of Our Lives’ spoilers: Impressions of “Paris”

We think this is a great companion piece to the main series, and are looking forward to seeing where things go from here. There’s great sceneary and set design, a pretty realistic portrayal of a marriage under pressure, as well as intrigue with DiMera.

We think the best part of the show is the chemistry between the two lead actors. They feel like a real couple who is devoted to each other as they try to overcome all the daily hardships that are thrown at them. Check it out online if you’ve missed it. The episodes are no more than ten minutes, making it a perfect thing to binge when you have a few spare minutes.

‘Days of Our Lives’ spoilers: The future

Chapter Two has already premiered, and is currently up to episode 2. We get a big crossover in this batch of episodes, as a certain Salem resident arrives with a special purpose in mind. Who is it? Well, you’re going to have to keep tabs on the site to find out. Last season, the episodes were added to the website after debuting on the app.

‘Bold and the Beautiful’ Weekly Spoilers Update: Katie Floored After Finding Out Anonymous Donor’s Identity – Is It Enough To Redeem Flo?