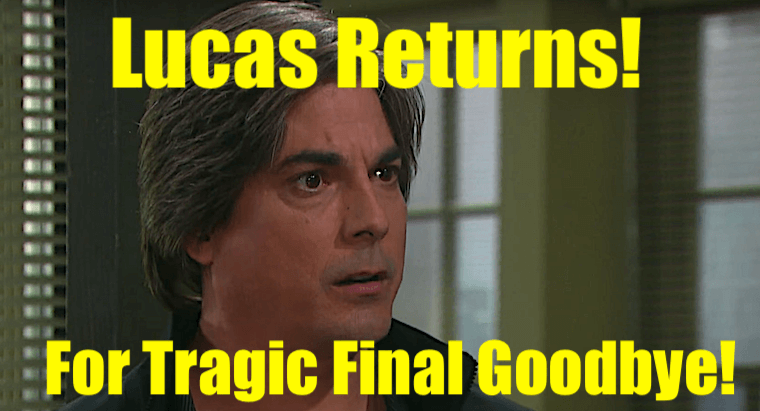 ‘Days of Our Lives’ Spoilers: Lucas and Will say goodbye

‘Days of Our Lives’ (DOOL) Spoilers for Friday, September 20 indicate that Lucas Horton (Bryan Datillo) is returning to Salem, which should be a happy occasion but it’s not. As it turns out Kate Roberts (Lauren Koslow) is dying, and they’ve called him in to say his last goodbyes. Of course, Lucas will want to know if anything else can be done and will consult with Dr. Kayla Johnson (Mary Beth Evans) but she’ll tell him that there’s nothing that can really be done at this point and they’ve done all they can.

He and son Will Horton (Chandler Massey) will share a tearful embrace while they prepare themselves to pull the plug. Of course, that won’t actually happen and Kate will end up surviving but it’ll definitely be touch and go for awhile.

‘Days of Our Lives’ Spoilers: Will is onto Vivian and Stefan, confronts Gabi

It looks like Will is going to overhear an interesting conversation between Vivian Alamain (Robin Strasser) and son Stefan DiMera (Brandon Barash), and may just confront Gabi Hernandez (Camila Banus) over this new information. Now whether or not Gabi goes ahead and incriminates Vivian remains to be seen, sure she doesn’t like Vivian all that much and Kate is her best friend but she does love Stefan and they are married, but who knows how loyal Gabi will actually be once she’s face to face with Kate’s grandson? Looks like that’ll have to wait till next week.

Meanwhile, poor Jennifer Horton (Melissa Reeves) is being held captive by Dr. Henry Shah (Piter Marek) who really doesn’t like being friendzoned, and has taken her hostage over it. Of course like all creepy, abusive men he’ll make sure to drive the point home that its her fault that she’s in the predicament and maybe if she had just decided to stay with him instead of tossing him away immediately for Jack she wouldn’t be tied up in a dark hotel room with him but.. come on, Henry, is that really true? I don’t know, I just get the feeling that it may have wound up that way anyway. Thankfully, Jennifer will be able to text Jack and give him a huge clue as to where she is, but we’ll have to stay tuned ’till next week to see that rescue.

‘Days of Our Lives’ Spoilers: Xander needs to learn to keep his mouth shut

Xander Cook (Paul Telefer) is going to be heavily questioned by Kristen DiMera (Stacey Haiduk) concerning Sarah Horton’s (Linsey Godfrey) new bun in the oven. He stupidly went and blurted things out to Kristen, and everyone and their brother knows how much Kristen has always wanted a child, right? Well, Sarah doesn’t want the kid, so… you can see where this is going, right? Some way, Kristen is going to get herself a baby and it may just be Sarah’s. Though, how will that happen? Stay tuned!!!

‘Young and the Restless’ Spoilers: What Happened To Adrian Rosales (Jay Montalvo) On Y&R?