‘Days of Our Lives’ Spoilers Thursday, September 12: Vicious Eve Returns To Salem More Vitriolic Than Ever – Has Nasty Payback In Mind! 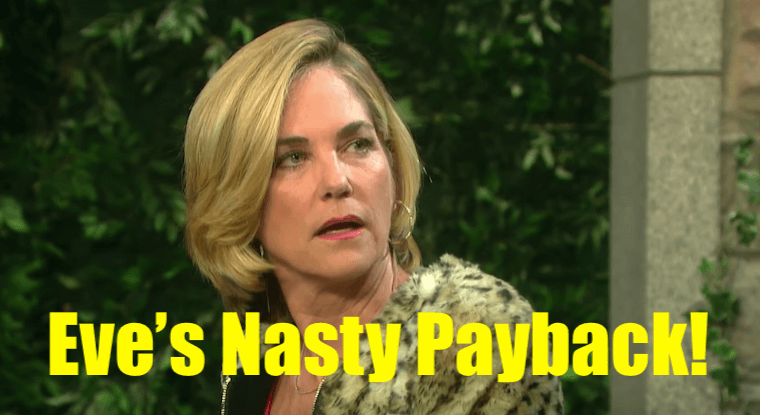 ‘Days of Our Lives’ (DOOL) spoilers for Thursday, September 12 find Eve Donovan (Kassie de Paiva) is back in town and that she’s got payback on her mind. She’s determined to destroy Jack Deveraux (Matthew Ashford) and any happiness he may have after suffering a tough loss of her own. This will come as bad news for both him and Jennifer Horton (Melissa Reeves). Eric Brady (Greg Vaughan) pulls the plug on his relationship with Sarah Horton (Linsey Godfrey) while Brady Black (Eric Martsolf) also has a tense encounter with Kristen. Here’s what you need to know.

‘Days of Our Lives’ Spoilers: Eve Donovan’s about to get divorced, unemployed and desperate

It begins with Eve feeling more angry than ever before. Just a few weeks ago she was on top of the world as the First Lady of Salem and the police chief commissioner. Now she’s about to get divorced, unemployed and desperate. ‘Days of Our Lives’ spoilers tease that she will be messing with Jack again by seeking Dr. Rolf’s (William Utay) help.

Unfortunately for Kristen DiMera (Stacy Haiduk), Nicole Walker (Arianne Zucker) isn’t the only person who wants to have words with her. Brady Black is also feeling pretty disgusted that he slept with her, all the while thinking that she was Nicole this entire time, too. Viewers can also expect to see John Black (Drake Hogestyn) giving Kristen a stern warning to steer clear from his son.

‘Days of Our Lives’ Spoilers: That’s all in the past for Eric now that Nicole Walker is back in town

Elsewhere, Eric will decide not to move forward in his relationship with Sarah. Even though he was pained to see his brother Rex Brady (Kyle Lowder) marry a woman that he thought he loved, that’s all in the past now that Nicole Walker is back in town. However, things are about to get quite complicated as Eric won’t be able to let go of Sarah altogether. Fans will have to tune in to find out what will happen next!

‘Bold and the Beautiful’ Spoilers Thursday, September 12: Brooke Absolutely Fuming After Epic Fight With Ridge, Sees Shauna In Her House – Viciously Throws Her Out!