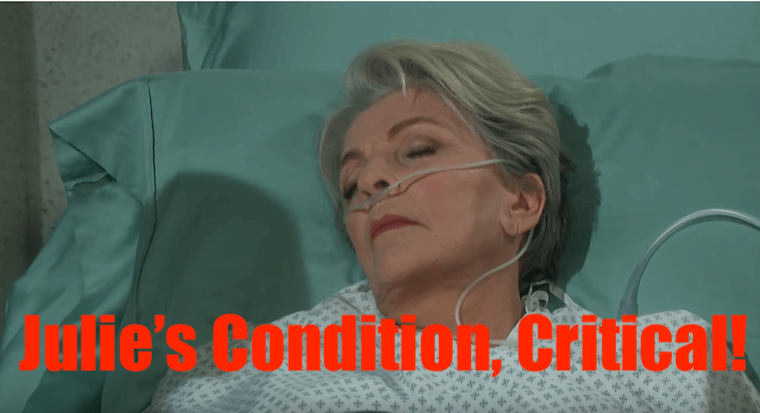 ‘Days of Our Lives’ (DOOL) spoilers indicate that Sarah Horton (Linsey Godfrey) has a real problem on her hands, Ben Weston (Robert Scott Wilson) doesn’t forget, and Stefan DiMera (Brandon Barash) might regret leaving mom alone. If you missed it, let’s get to your ‘Days of Our Lives’ recap.

‘Days of Our Lives’ spoilers: Seriously?

Gabi Hernandez (Camila Banus) is not happy to get a visit from Rafe Hernandez (Galen Gering) today. He’d heard from Lani Price (Sal Stowers) that Gabi left Julie Williams (Susan Seaforth Hayes) to die. While she mentions Gabi’s story, it was clear that Lani didn’t buy it. That’s why Rafe decided to stop by and check with Gabi. She’s insulted at the implication and sticks to her story.

Rafe, however, is concerned. She did pull a lot of stuff on Abigail Deveraux (Kate Mansi) in the name of revenge. Not to mention the confrontation on the stairs with Julie, and her marrying Stefan for revenge. He thinks she’s letting her need to settle scores get to her.

Gabi informs him that she was not, in fact, trying to get back at Julie with the latest incident. Furthermore, she lets him know that her marriage to Stefan is now very much real. Despite everything, she fell for him, just as she’d been warned would happen. She even defends Stefan at one point.

‘Days of Our Lives’ spoilers: Consider yourself warned

After this little conversation, Gabi goes by the Salem PD to have a chat with Lani. She makes it clear she doesn’t appreciate Lani spreading such an ugly rumor around and reasserts her innocence. Before she leaves, she warns Lani that she’ll regret it if she keeps this “she left her to die” thing up.

‘Days of Our Lives’ spoilers: Pile on

Lani and Rafe aren’t the only ones on Gabi’s case. Ciara Brady (Victoria Konefal) also has a few choice words for Gabi about this whole situation when Gabi arrives at the hospital with flowers. Gabi is probably feeling like a broken record, as she has to defend herself once again. Ciara actually seems to soften a bit and apologizes for snapping at her. She’s just really worried about Julie.

Her heart’s not in good shape, and she’s not a candidate for a transplant. She wonders if Julie was laying there too long and it caused the extra damage. Way to be passive aggressive, Ciara. Although, we do think she’s just speaking without thinking right now.

‘Days of Our Lives’ spoilers: An offer he can refuse/WTH?

Ben, as you might remember from yesterday, is tied up at Casa Kiriakis and it’s being “suggested” that he ends things with Ciara. Ben had refused. As Xander Cook (Paul Telfer) had eventually refused to kill Ben, Victor Kiriakis (John Aniston) decided to do it himself. As he was strangling Ben, Brady Black (Eric Martsolf walked in. He wants to know what the hell is going on here.

When Victor explains (in a very off-hand awesome way), Brady is not pleased. He unties Ben and lets him leave. Victor objects and brings up the possibility of the cops getting involved, but Brady thinks Victor should have thought about that before trying to take out Ciara’s boyfriend. Ben is not exactly moved by this generosity. He thinks that Ciara needs to know exactly who her grandfather is and he is planning to go to the police.

Ben Weston eventually gets back to the hospital, but before he can tell her what happened, Ciara tells him about the job offer at Titan. She really wants to do this (so long as leaving Ben isn’t part of the deal) and thinks she can do a lot of good at the family company. Her excitement makes Ben rethink telling Ciara the truth. He decides to keep his mouth shut, but he does later make sure Brady knows he doesn’t forget.

Stefan is worried when he arrives at the hotel Vivian Alamain (Robin Strasser) is at and finds her gone. She eventually shows up, dirty, which makes him wonder what’s going on. She tries to sell a story about foraging, but Stefan isn’t exactly buying it. Getting it touch with the earth isn’t really her style.

She ends up confessing to killing Kate DiMera (Lauren Koslow) and burying her in an open grave. He wants to know what happened to the plan they had to wait for the right moment to get back at her. She says that she was there, Kate was there, the open grave was there. Seemed like the right time to her. We’re not sure Stefan knows what to make of all this. We’re guessing he probably wishes he’d left someone there with her. This will be especially true later, because we see Kate’s hand poking out of that grave at the end.

‘Days of Our Lives’ spoilers: What will she do?

While Eric Brady (Greg Vaughan) and Nicole Walker (Arianne Zucker) continue to re-connect and he confesses his relationship with Sarah—one he swears is over now—there is trouble on the horizon.

Sarah is back at home, wondering how she’s going to tell Eric the truth. After speaking with Eric a moment, she wonders if she even can. This is definitely going to be an obstacle to the reunited pair’s happiness.

Sarah may soon have an ally in this. Xander has been doting a bit, cleaning up the trash can she got sick in, as well as offering to bring her something to help her stomach. She is rude at first, but eventually apologizes before Xander makes her get under the covers to rest. He believes she has a stomach bug.
Later, he finds the envelope with the test results in her trash can.

‘Bold and the Beautiful’ Weekly Spoilers Update: Shauna Seduces Drunken Ridges Into Sex, Gets Him To Cheat On Brooke!

‘Bold and the Beautiful’ Spoilers: Ridge Puts Stamp On It, Finalizes Devilish Deal!