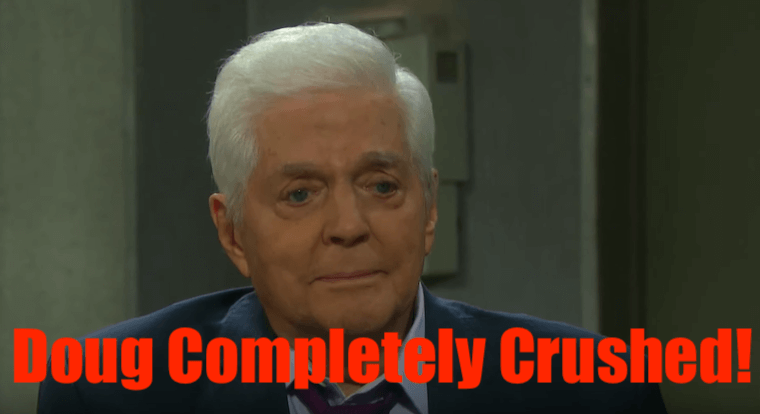 ‘Days of Our Lives’ (DOOL) spoilers reveals Stefan DiMera (Brandon Barash) makes an impossible request of Gabi Hernandez (Camila Banus), Kayla Brady (Mary Beth Evans) gets a shock, and Doug Williams (Bill Hayes) is dealt a harsh blow. We also have Jack Deveraux (Matthew Ashford) dealing with a Diva mad scientist. If you missed it, let’s get to the ‘Days of Our Lives’ spoilers.

Kayla and Jennifer Horton (Melissa Reeves) are talking at the hospital when Kate DiMera (Lauren Koslow) suddenly emerges from an elevator. She’s covered in blood and dirt, and she begs for help before collapsing on the floor.

Kayla calls Haley Chen (Thia Megia) over and orders her to get someone to take Kate to a room, check her blood type, and book the ER. She tends to Kate until she’s brought to a room, where Kate’s Blood pressure is dropping like a stone. She has Haley assist with the paddles and eventually manages to bring Kate around. They still need to get her through an operation, though. Kayla wishes Kate could tell her who did this before leaving her alone a moment. Obviously, as soon as Kayla leaves, Kate manages to whisper Vivian’s name.

Back at the DiMera mansion, Stefan admits to Gabi what happened. She can’t even at the idea that Stefan gave Vivian Alamain (Robin Strasser) a gun. Stefan justifies the decision by saying his mother was afraid of who Kate might have on her payroll at the Salem Inn. He stops Gabi from calling the police, and begs her to cover for his mother. She points out they’ll be accessories to murder, but he’s a good little mama’s boy and thinks that Kate’s fate wasn’t exactly unjustified, considering what she did.

Gabi eventually agrees to keep silent, although we’re surprised she does. After all, she’s the one who was upset about being kept from her daughter so long. If this was exposed, she’d be facing a real charge that will keep her locked up again. She doesn’t even bring up the concern. Is this really Gabi, or did she somehow get replaced with a long-lost stupid twin?

Things get worse when Eli Grant (Lamon Archey), who’d learned of the incident, comes along to ask some questions. He informs them of Kate’s shooting and they don’t seem to react or show any shock at all until they’re told she’s alive. Yeah, they’re not looking the least bit suspicious here.

Eli seems to clue in on that, because he point-blank asks if Stefan did it. He denies the accusation, so Eli then asks if his mother did. Eli had been informed of Vivian’s living status at the hospital. Jennifer, who had seen her and Wilhelm Rolf (William Utay) alive, is convinced that Vivian is the actual shooter. She is even preparing a big story for the paper.

Doug is devastated today to learn the truth of Julie Williams’ (Susan Seaforth Hayes) condition. Hope Brady (Kristian Alfonso) is just as devasted to have to tell him. She’d been doing everything she could to find a way to help Julie and at least give Doug some kind of hope to go along with the news, but it’s not looking likely.

Someone would have to willingly choose to donate a heart to her. There’s a nice montage of old Doug/Julie scenes that plays. Later, Julie wakes and asks Doug when she’ll get to go home. Doug had vowed he wasn’t going to give up. Somehow, he will find a way to save her.

‘Days of Our Lives’ spoilers: Dealing with a diva

It seems our genius mad scientist is a bit of a diva. He is forcing Jack and JJ Deveraux (Casey Moss) to order him all kinds of stuff from the Pub and is going on about being glad he can enjoy a meal in peace without Vivian there. JJ is quickly losing patience and wants Dr. Rolf to get on with things. He is actually sort of rude, which gets to Jack.

While Rolf uses the facilities, he lectures JJ about how they really have no choice by to play along. Rolf holds Jack’s only hope of regaining his memories, so he’s got all the power here. He asks JJ to let him indulge Rolf without the commentary.

When Rolf returns, JJ apologizes for his behavior and explains how important this is. He’s willing to be patient, though. Rolf accepts and warns JJ and Jack that he’s going to have a difficult time making the serum Jack needs without his diary. It’s going to be a dangerous process with no guarantees, so he can’t be pressured.

‘General Hospital’ Spoilers: Stone Cold Is On the Case!

‘Bold and the Beautiful’ Spoilers Wednesday, September 11: Wiping the Slate Clean – Flo & Thomas Completely Free, Like Nothing Ever Happened!

NBC ‘Days of Our Lives’ Spoilers: All About Kristen DiMera’s Zombie-Like…