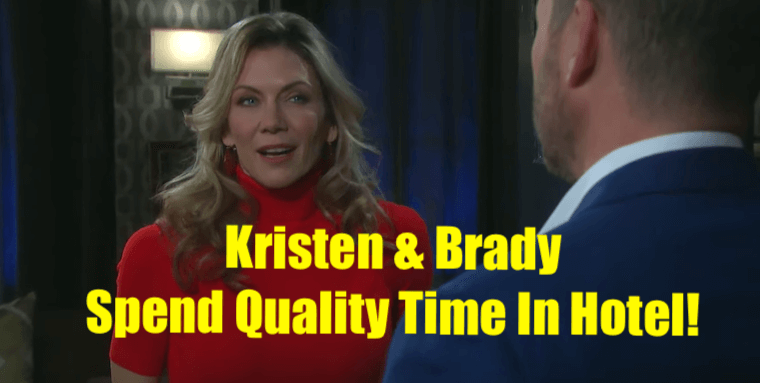 ‘Days of Our Lives’ (DOOL) Spoilers tease that double the trouble is one the way for some of our favorite characters in Salem. Eric Brady (Greg Vaughan) and Nicole Walker (Arianne Zucker) are making up for loss time while Kristen DiMera (Stacy Haiduk) makes his move on an unsuspecting Brady Black (Eric Martsolf). Here’s what you need to know.

It begins with Eric and Nicole basically going around Salem attached at the hip to him. They end up bumping into Brady and as one would expect, everyone apologizes for the situation that they’ve been put in. And just to make sure, Brady does a little one over at Nicole’s neck just to make sure that he is talking to the right person. So that might not have happened but we are sure that Brady is checking just in case. We all know what happened the last time he thought he was seducing Nicole in bed just to find out later that it was actually Kristen DiMera in a Nicole mask.

‘Days of Our Lives’ Spoilers: Will Brady Make The Same Mistake?

Speaking of Kristen, it looks as though she’s not going to let go of Brady. However, John Black (Drake Hogestyn) visits Kristen DiMera at the police station and warns her to stay away from her son. Of course Kristen doesn’t listen or take him too seriously. Nicole then enter and basically lunges at Kristen for impersonating her and almost destroying so many people’s different lives.

‘Days of Our Lives’ spoilers also tease that Kristen will demand to be let go since she kept her part of the bargain with Jack Deveraux (Matthew Ashford). While letting Kristen go to run free on the streets of Salem probably isn’t the best idea, Jack doesn’t have a choice. Once Kristen is freed she runs into Brady in the town square and of course, they end up going a hotel room.

You’d think that Brady would have learned the first time around, but no! DOOL Spoilers tease that now that Kristen is in Brady’s mind, he won’t be able to stop thinking about her. Chances are they end up doing the deed (with Kristen as herself this time), but only time will tell the exact moment.Of course, fans will have to tune in to find out what will happen next.