‘Bold and the Beautiful’ Spoilers Wednesday, September 11: Wiping the Slate Clean – Flo & Thomas Completely Free, Like Nothing Ever Happened! 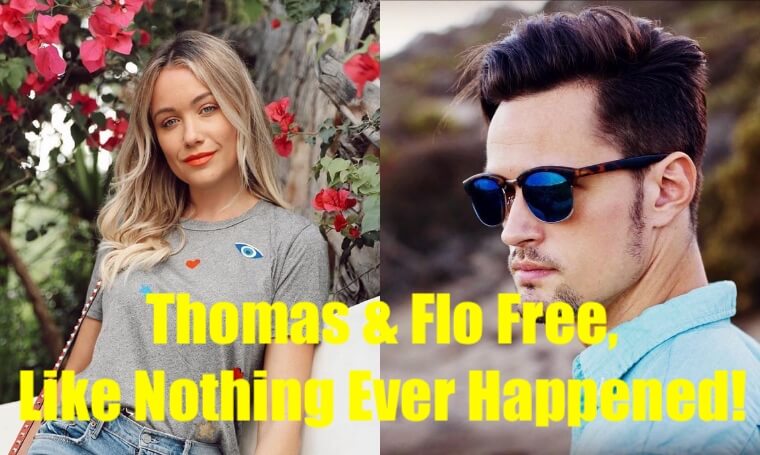 ‘Bold and the Beautiful’ Spoilers: Ridge is in the doghouse

‘Bold and the Beautiful’ (B&B) Spoilers for Wednesday, September 11th, 2019 indicate that Ridge Forrester (Thorsten Kaye) just landed himself in a pot of boiling hot water. He signed an immunity deal which means that now, not only Thomas Forrester (Matthew Atkinson) will go free, but Flo Fulton (Katrina Bowden) will go free as well and not be punished for taking part in the baby swap scheme.

So technically, whatever they did to poor Hope Logan (Annika Noelle) and Steffy Forrester (Jacqueline MacInnes Wood), not to mention little Beth Spencer (River Davidson and Madeline Valdez) will go unpunished and they can walk around free as if nothing ever happened. Of course, Flo and Shauna Fulton (Denise Richards) are going to be extremely grateful, but Ridge is going to have quite a time explaining this to Mama Bear Brooke Logan. (Katherine Kelly Lang)

‘Bold and the Beautiful’ Spoilers: “I just let two criminals go free, how was your day, honey?”

Looks like he’s going to catch it the second he walks in the door. He’s just signed the immunity deal and has probably not rehearsed what he’s going to say to her in the car on the way home because how do you put a good spin on that, really? “Hi honey, I’m home. I just signed an immunity deal releasing the two people who hurt your daughter and kept your granddaughter away for the first formative months of her life. How was your day?”

He’ll immediately have to fess up and Brooke will immediately hit the roof about 5 seconds later because not only did he let Flo and Thomas go free, but he also made that decision all by his lonesome, no wifey consultation. This is going to incense Brooke even more!

‘Bold and the Beautiful’ Spoilers: Mama Bear Brooke vs. Ridge

Ridge is going to try and argue that he did it all to keep down the press about the matter, that if Flo took the stand that Hope and Steffy and Baby Beth would all become household names in a sordid tabloid scandal and he wanted to prevent that, but argue all he might, ultimately Brooke realizes that his ultimate obligation was to Thomas and this is what makes her blow her top. Expect there to be an explosive argument between Brooke and Ridge!

‘Bold and the Beautiful’ Spoilers: Sally don’t need no man!

Meanwhile, Wyatt Spencer (Darin Brooks) will unwittingly stick his foot in his mouth. While he and Sally Spectra (Courtney Hope) are spending some time together, he’ll extend an invitation to move back into the beach house with him. Of course, Sally, who just moved out of that place a few months ago will probably tell him no way!

After all, wasn’t it just a few weeks ago that he and Flo were all cozy together in the beach house? Yeah, nope, looks like Wyatt will have to cool his jets a bit and he’ll be only so glad to do so because apparently it’s true what they say – the more confident you are the more attractive you are, and right now Sally is beaming. But will it stay that way? Stay tuned!