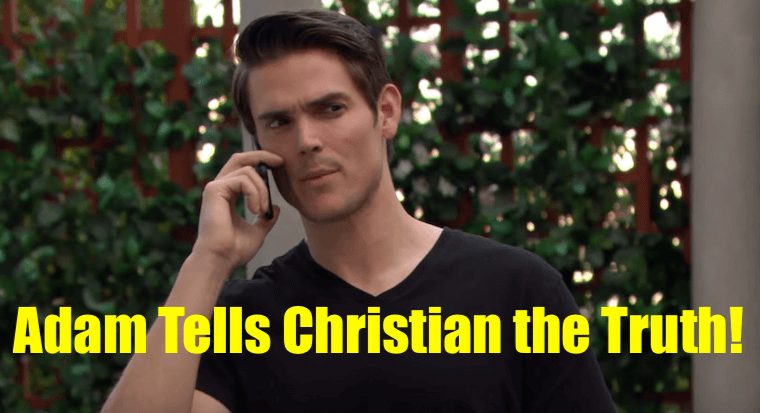 It begins at Adam’s place where Phyllis is giving him an offer that he can’t refuse. She says $10 million for the Grand Phoenix while Adam says $15 million. Michael Bennett (Christian LeBlanc) is also there. Adam thanks him for filing the petition in court. Today was his first meeting with Christian. Michael tells him he’s welcome.

At Nick Newman’s (Joshua Morrow), he learns that Chelsea has her late husband’s money. She doesn’t like it that she still has her past to worry about, but there’s nothing that she can do. She also says that without Chloe Mitchell (Elizabeth Hendrickson) things just aren’t the same. She says that she’s not looking to go back to her old lifestyle and wants to start things at a clean slate.

At Society, Kyle Abbott (Michael Mealor) gets upset when he sees Theo at his bachelor party. He tells him that he’s been nothing but problems ever since he returned. Summer Newman (Hunter King) is also there. Afterwards, Theo tells Phyllis that he can help her out with her investments. Theo also has a few good things to say about Summer and both agree that Kyle did her wrong.

The Young and the Restless Spoilers: Adam Swears He Didn’t Do It!

Adam is holding a soccer ball at the park when Billy swings by and tells him to give it up. Adam doesn’t know what he’s talking about. He then realizes that Billy thinks he is the one who broke into his house. Adam swears that he would never do anything to disrespect Delia’s memory. Billy gets spiteful and tells him to enjoy every moment he gets with his son because it might not happen in the future. Adam calls Nick up and tells him that the judge ruled that Victoria Newman (Amelia Heinle) was in violation.

Chelsea finds Billy at the bar. She talks about how Calvin died in his sleep. Chelsea says that she wants to stay in Genoa City. Billy asks about the inheritance money but then realizes that she wasn’t willing to tell him anything about it. He apologizes for getting too personal. He also says that he’s happy Adam hasn’t manipulated her just yet. Chelsea tells him that Adam never had anything to do with the doll in his house. Nearby, Theo can’t help but think that Adam is getting all of the credit for Phyllis’ hard work.

Adam is playing soccer with Christian at the park. He talks about how his father taught him how to play. Adam asks him if he remembers Connor. He then tells him that he’s his real father.