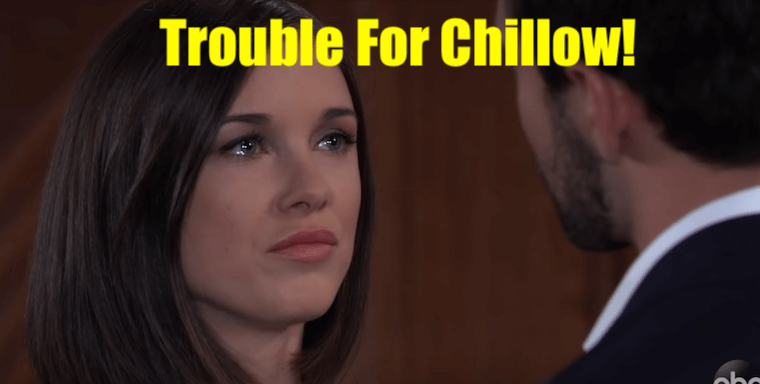 ‘General Hospital’ (GH) spoilers for the week of Monday, August 12 to Friday, August 16 indicate that Julian Jerome (William deVry) really wants to buy the Dawn of Day House and convince girlfriend Dr. Kim Nero (Tamara Braun) to stay in Port Charles and live there with him. No word on whether or not her mind is actually made up yet, but it looks like things are still open to negotiation, realtor Lucy Coe (Lynn Herring) will be meeting with both this week to discuss the possibility of this house. Though, I don’t know, Kim seemed pretty well sold on the idea of leaving Port Charles last week. We’ll just have to see.

Brad Cooper (Parry Shen) will try to convince Father-in-Law Julian to reconsider a move he’s making. Perhaps he doesn’t want him to purchase the DoD house (considering all that went on there, would you really want to live there?), or perhaps it has something to do with little Wiley Cooper-Jones. Either way, eventually this week we will get to see an emotional exchange between Julian and his son Lucas Jones (Ryan Carnes) over something.

Poor Elizabeth Webber (Rebecca Herbst) has really been put through the ringer. First she almost lost her son, Cameron Webber (William Lipton) and now she’s basically lost the love of her life, Franco Baldwin (Roger Howarth), however it looks like she will be giving him updates later on in the week so maybe there’s a possibility that the guy woke up? We can only hope. After all, Dr. Arthur Cabot (Time Winters) did say if the memory mapping procedure failed, then he would wake up as Franco and not Drew. Either way, both Liz and Drew Caine (Billy Miller) will be shocked at the developments.

Looks like Dr. Kevin Collins (Jon Lindstrom) will have some news for Alexis Davis (Nancy Lee Grahn) concerning her new ‘friend’, Dr. Neil Byrne (Joe Flannigan). Alexis wants this relationship to escalate into something romantic, but she’ll find out that Neil has legit reasons to be keeping to himself. Why? Well, no word yet but apparently Kevin will be the bearer of bad (or perhaps good, who knows?) news for her. No word yet on what her reaction will be.Laura Webber (Genie Francis) will also be a busy lady this week! But no word yet on what she’ll actually be doing. Hmm!

Nina Reeves (Cynthia Watros) will have a bit of a weak moment around Jasper Jacks (Ingo Rademacher), will he lend her a shoulder to cry on? Seems as if she kind of needs one right now, her ‘daughter’, Sasha Gilmore (Sofia Mattson) is very, very sick in the hospital and who knows where Valentin is. So Jax may just be what the doctor ordered, for Nina that is. Will this make Nina start to see him in a different, maybe more romantic light? Only time will tell.

Hayden Barnes (Rebecca Budig) and Dr. Hamilton Finn (Michael Easton) will finally have a sit down together. It’ll be Finn who extends the invite and Hayden who (probably with a lot of reluctance) accepts. Maybe this time, they’ll finally get to talk about what went down between them and what happened to their baby and all that jazz, without the aid of truth serum. (Although without that little booster who knows if what Hayden tells him will be the truth.) Either way, it’ll be interesting to see what Hayden’s been getting up to in the time that she’s been away from Port Charles.

It looks like there may be trouble in paradise for ‘Chillow’. Willow Tait (Kate MacMullen) may find that there’s a side to her boyfriend, Detetive Harrison Chase (Josh Swickard) that she doesn’t like after all. Willow’s got some pretty complex PTSD connected to the whole Shiloh Archer (Coby Ryan McLaughlin) business, so when she sees traits reminiscent of that in Chase, she could be really turned off of him. But will it be enough to break them up, or will it just be a momentary blip on the relationship radar? Stay tuned!!!