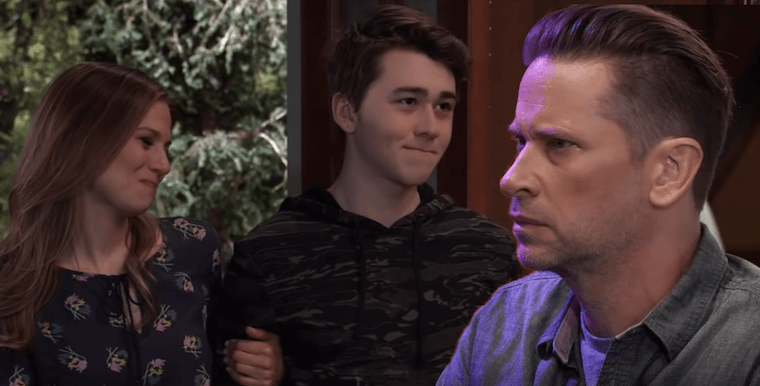 ‘General Hospital’ (GH) Spoilers for the week of Monday, August 19-Friday, 23 indicate that Franco Baldwin (Roger Howarth) AKA: Drew 2012 will pay a visit to Dr. Kim Nero (Tamara Braun) and they will revisit his feelings for her. What that will mean for his and Liz’s relationship will be anyone’s guess but we can certainly surmise that it won’t be good.

It also looks like Monica Quartermaine (Leslie Charleson) will have a chat with her as well, no word on what they actually chat about but maybe Monica cautions her not to fall for Drew 2012 because the real Drew gave her the lowdown on the situation last week. Jason Morgan (Steve Burton) will also look for Franco because he wants to know just what on earth is going on with our favorite cult leader, Shiloh Archer (Coby Ryan McLaughlin), and Franco is the only one who is able to fill him in on what exactly went down in Afghanistan.

Speaking of Shiloh, this guy’s still trying to work his mojo from behind bars! Hah! You have to admire the hustle in an odd way. He will be willing to make a trade for something, no word yet on what that actually is. Maybe he bargains with a higher up for some sort of in-prison privelege. Or, knowing Shiloh a lighter sentence or perhaps even having his sentence commuted in exchange for the trade. Who knows with this guy? You can’t ever really tell what he’s thinking, but we do know one thing, somehow this rascal always seems to remain at least two steps ahead of everybody else. We’ll also get to see how Helena Cassadine (Constance Towers) was involved in all of this when her actress returns for some flashbacks.

Poor Cameron Webber (William Lipton) can’t seem to stay out of trouble, and this week will be no different! This time there is no Franco to bail him out, but fortunately, Drew Cain (Billy Miller) will be there. No word yet on what kind of jam Cam has gotten himself into this time. Where’s his Mom in all this? No shade but it looks like Liz could bail him out every once in awhile instead of waiting around for a Dad figure to step in and help the kid. Maybe she doesn’t know about it, but hey, we’re all grateful to Drew for being there for the kid when he needed somebody.

‘General Hospital’ Spoilers: The coffee business really goes off this time of year

Looks like Sonny Corinthos (Maurice Bernard) will have one more headache to deal with this week when something happens at one of his many warehouses. Man, the coffee business sure is popping these days. While he may be able to handle the initial problem, it also may be the start of a whole new wave of problems that could kick off a story line about Sonny and his business. Either way, he’s going to have some problems this week. Better start chewing some vitamins, Sonny!

Jasper Jacks (Ingo Rademacher) will be put in an interesting position this week. As it turns out, everyone’s suspicious of Hayden Barnes (Rebecca Budig), and Jax will have to step in and defend her to someone this week. No word on who yet, maybe he’ll have get between her and Dr. Hamilton Finn (Michael Easton) because he seems like a likely culprit to question Hayden’s intentions. There is also Dr. Liesl Olbrecht (Kathleen Gati) to consider on the list of suspects. It seems everyone is kind of side-eyeing Hayden these days.

Speaking of Liesl. She will have to rely on Maxie Jones (Kirsten Storms) for help this week. Since it’s Liesl, God only knows what the thing truly is that she needs help with but it looks like the mission will have an underlying ulterior motive (since when do Liesl’s actions not have one of those? I’d be more surprised if she were doing things with a pure heart.), it will also come at a personal cost for Maxie. It looks like Peter August (Wes Ramsey) will not like where this is going at all. (Well you’re the one that signed up for that hot mess, didn’t ya, Peter?)

Finally, Ava Jerome (Maura West) will be hit hard this week by her grief over her daughter, Kiki Jerome (Haley Erin). First she’ll have a dream that fills her with all kinds of questions and then it looks like her week just deteriorates from there. Kevin Collins (Jon Lindstrom) will step in at one point and tell her that he only wants the best for her, which’ll make her feel less alone. Yay, good on Kevin for being nice guy. But what will lead up to Ava feeling so alone in the world? Stay tuned!!!