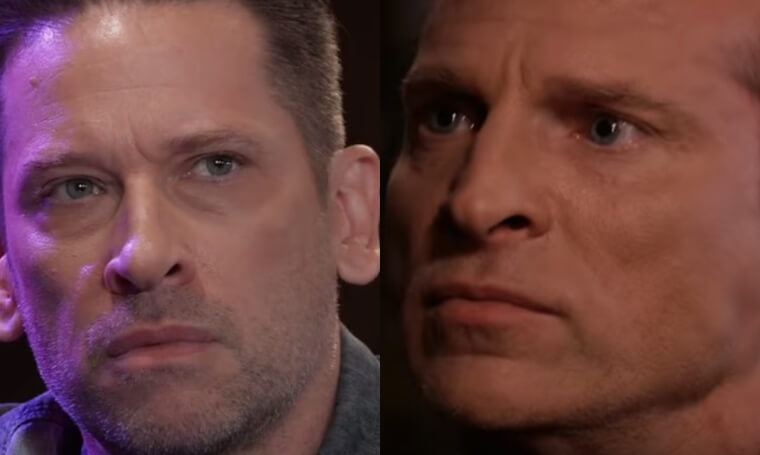 Hayden goes by GH, where Finn has news for her. He explains what happened with Franco, and Hayden is shocked. She’s also grateful that he let her know what was going on so she can help Elizabeth Webber (Rebecca Herbst). He also explains about Sasha Gilmore’s (Sofia Mattsson) condition, as Hayden has spent time at the Crimson offices. He thinks it’s unlikely she caught anything, but she should be on the alert for strange symptoms. The talk gives them a chance to clear the air between them and come to a bit of peace.

Meanwhile, war is breaking out at the Floating Rib, where Franco has come across Jason Morgan (Steve Burton). Obviously, thinking he’s Drew, things get interesting. He shows a bit of animosity toward the rich twin that had everything, and expresses his desire to want to get out of Port Charles. Jason won’t help with a ticket out, but he’s willing to put him up somewhere. During the conversation, he calls Franco by his actual name a couple times, which irritates Franco. He warns trouble if he hears that name again.

Meanwhile, Harrison Chase is watching this and Willow Tait (Katelyn MacMullen) notes his distraction. This leads to a bit of a chat about his job and whether or not she can handle it. It worries her, of course, but she’s willing to handle it. That’s when Chase notices a fight about to happen and gets up to deal with the situation.

He, of course, makes the mistake of calling “Drew” Franco and Franco nails him. Jason points out that he’s just assaulted an officer, which Franco tries to play off. How was he supposed to know that if the guy isn’t in a uniform? Either way, it happened, and Chase is likely concerned by the clear aggression Franco was showing, so he puts him under arrest.

‘General Hospital’ spoilers: Holding it together

Back at home, Elizabeth has no clue where Franco is or if she’ll even see him again. She wants to find a way to help, but they can’t if he won’t even try accepting there’s truth to what they say.

Cameron Webber (William Lipton) comes downstairs and asks what’s going on. She explains about Franco leaving the hospital. Cameron is supportive and offers to tell his brothers, but Elizabeth declines. She has to figure this out herself. As they talk, Cameron says he’s finally realized what kind of person Franco is. He’s not willing to give up on him. He’s going to help his mom do whatever they can to show Franco they’re here for him and love him.

At the pub, Joss is getting ready to tutor Dev so he’ll be caught up when school starts. Dev isn’t into this at all. He’s just put a full day in at the warehouse and wants to relax. Besides that, he’s not a huge fan of the college idea and just wants to be part of the Corinthos business. Joss counters that the only way to get in is to earn Sonny’s trust. And the only way to do that is work hard. We guess he forgot when Sonny made it very clear a while back that Dev getting an education was non-negotiable? Dev relents and wants to know where they start. She suggests American history and is shocked when Dev knows several historic works by American feminist writers. He says he picked up a lot on the streets with so many different types of tourists making their way through his country.

Sam stops by the Corinthos house, where they talk about the Franco/Drew situation. Eventually the wedding is mentioned and Sam can’t believe she forgot. She asks how it went and gets a kick out of Sonny being the “priest” for this fake wedding. She also thinks it’s sweet, but she’s in for a surprise. They explain the wedding got them thinking and they want to renew their own vows. Sam’s excited and already full of ideas.

Drew and Monica Quartermaine (Leslie Charleson) get a chance to discuss the situation with Franco and Drew’s memories. Monica thinks it’s a great opportunity here. Drew obviously had hope, as he never got rid of the flash drive, that he could somehow get those memories back. He agrees that he was hopeful that it could one day be done without sacrificing his memories of the past 7 years. She says that this is his chance. He can talk to Franco and learn stuff about himself, things that Monica and the rest of the family would love to know as well. He’s just not sure that Franco would bother telling him anything.