‘Days of Our Lives’ Weekly Spoilers Update: No Jack and Jennifer Reunion! 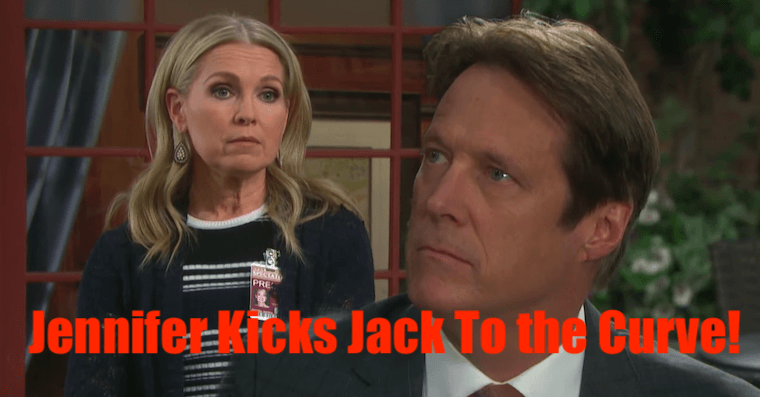 ‘Days of Our Lives’ (DOOL) spoilers update for the week of Monday, August 12-Friday, August 16 indicate that Haley Chen (Theia Megia) will have a medical emergency this week! Apparently the tranquillizers that she’s been taking to help her sleep haven’t really agreed with her. Uh-oh! Who will be the one to help her out in her time of need? Looks like her knight in shining armor won’t be JJ Deveraux (Casey Moss) but instead will be Tripp Dalton (Lucas Adams). Does JJ even know about the tranquillizers she’s taking? Last time we checked in, no. So it would only make sense that Tripp would be the one to help her out in this situation.

Days of Our Lives Spoilers: Chloe and Marlena talk

Looks like Chloe Lane (Nadia Bjorlin) will be concerned about ‘Nicole Walker’ (Arianne Zucker) this week, so she will talk to Dr. Marlena Evans (Deidre Hall) about what she can do to help. Everyone notices that ‘Nicole’ is acting pretty out of character and of course they all kind of blame the fact that she just lost her child, little Holly Jonas (Harlow and Scarlett Mallor) for that. Grief does strange things to people, after all, and no one grieves in exactly the same way, But as her bestie, Chloe will be more concerned than your average bear – and she has every right to be – after all, we don’t know where the real Nicole is!

Days of Our Lives Spoilers: Marlena and John plot for romance

There will be some cute moments between our beloved Doc, Marlena, and her hubby John Black (Drake Hogestyn) this week. As it turns out, they’re both planning a romantic evening with the other one but neither one will realize what the other is up to. It’ll be cute to watch them go around, trying to arrange things behind their significant others back, but it looks like things won’t turn out so well for them. ‘Nicole’ will ruin things by butting in. (You have a lot of nerve, Nicole!)

Days of Our Lives Spoilers: ‘Nicole’ will have it out with Marlena

Seems that won’t be the only thing Nicole ruins this week, Nicole will actually come for Marlena and they’ll both have a bit of a go at one another. This will make no sense to Marlena at first because, after all, what did she do? But what we all know is Kristen DiMera (Stacey Haiduk) is masquerading as Nicole and we realize full well the kinds of feelings she has toward Marlena. They both have a history with John, and once upon a time Kristen lost John to Marlena so that has to be a lasting burn, watching those two be happy with each other. No wonder she’s trying to ruin it! (Even though she kind of has moved onto Brady… oh well!)

Days of Our Lives Spoilers: Nicole takes on Gabi

‘Nicole’ will also take on Gabi Hernandez (Camila Banus) this week. As we all know the rivalry between tehse two escalated when both of them decided to make power move marriages, one married to Tony DiMera (Thaao Penghlis) and the other married to Stefan DiMera (Brandon Barash) in order to gain control of DiMera enterprises. These rivalries will culminate in the battle of the ages this week and no word yet on who’s going to win!

Days of Our Lives Spoilers: No Jack and Jenn reunion yet

Remember how all us old school Jack and Jenn fans were rooting for those two to get back together? Well, cancel the streamers, because it looks like that isn’t going to happen just yet. Jack Deveraux (Matthew Ashford) will confront Jennifer Horton (Melissa Reeves) on an article she did awhile back on him. Since Jenn has been mad at Jack for awhile, chances are this reaction won’t be positive and we’ll have to sit through another fight between those two… or will we? Stay tuned for that.

Days of Our Lives Spoilers: Anna DiMera has big news

Looks like Anna DiMera (LeAnn Hunley) will have an announcement to make this week, but no one knows what it is yet. Could it be in regards to Tony DiMera? After all,she did find out that he was really alive last week and is none-too-pleased that he let her languish in sorrow over him for so long. Or maybe she has a revelatin about DiMera entreprises (man, it would be funny if Nicole and Gabi did all that work just to end up empty-handed… which very well could happen!), or it could just be that she’s gong to stay in town a little while longer.

Days of Our Lives Spoilers: Kate makes a deal… with who, though?

Kate Roberts (Lauren Koslow) will be wheeling and dealing this week, but her alliances may be shady. Which ‘devil’ will she make the deal with? Since Ted Laurent (Giles Marini) is gone, it’s anyone’s guess but the two top contenders are Kristen and Gabi. As we all know, Kate is always about furthering her self-intersts, and this week will be no different, she’ll just have to figure out just where her interests are better served. So, who will it be? Stay tuned!!!