‘Days of Our Lives’ Spoilers: Xander Tells All, Sings Like a Canary – Kristen’s Salem Days Numbered! 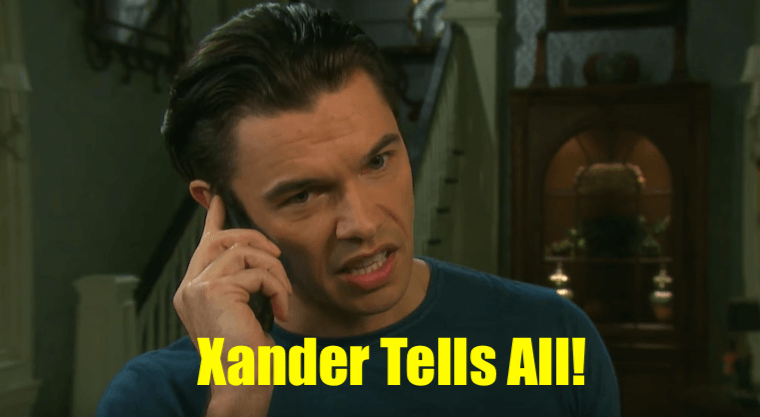 ‘Days of Our Lives’ spoilers: Throwing down

Anna rants to Marlena Evans today about Tony DiMera (Thaao Penghlis) being married to Not-Nicole. Marlena agrees that Tony’s reasoning for staying in the marriage is odd, so she goes to speak to him about it. He reiterates everything he’d already told Anna, but asks Marlena to tell her that it just not their time right now. He promises they’ll be together.

‘Days of Our Lives’recap for Thursday, August 15: Xander to sing like a canary to save himself

Meanwhile, a now solo Anna is leaving the pub when she runs into Not-Nicole. Not-Nicole was on her way to convince Wei Shin (Michael Hagiwara) that Gabi DiMera (Camila Banus) is a gold-digging liar who will destroy DiMera. Instead, she gets confronted by Anna, who wants to kill her. Roman Brady (Josh Taylor) gets between the women and he leads her away. Poor guy is about to regret this move…

‘Days of Our Lives’ spoilers: WTH?

After a conversation with Marlena Evans (Deidre Hall), Tony decides to seek Anna out. When he enters the pub, she’s standing with Roman. She tells Tony that if he’s come to apologize it’s too late. She’s getting married to Roman. The look on Roman’s face is priceless. Seriously.

Ben is going planning to break in Not-Nicole’s room to search for evidence. Ciara Brady (Victoria Konefal) doesn’t like that idea. She’s afraid he might get caught, which would be especially bad considering he already has a record.

When Ben refuses to back down, Ciara takes matters into her own hands and breaks into the room face. The smart-ass look on her face when he does a double-take upon seeing her is awesome. She explains that two of them searching is better, and she will take full blame for the break-in if they’re caught. Ben objects, but she asks if he wants to keep fighting or get to searching before Not-Nicole returns? He’s obviously opted for the latter when the door starts opening.

‘Days of Our Lives’ spoilers: I did nothing

Kate DiMera (Lauren Koslow) has decided to drop by to see Not-Nicole, as Tony was no help in getting what she wants. Finding the door already unlocked (good move, #cin….), she enters. We’re still wondering how on earth Ben and Ciara manage to hide under the bed before she sees them. Especially Ciara, as she was further away. Ah, the magic of TV editing.

Anyway, Not-Nicole had gotten a message from Xander that sent her running back to her room. When she sees Kate there, she is accusatory, but Kate swears the door was already opened and gives a very nonchalant “wasn’t me” response to Not-Nicole commenting on the state of the room. Seeing as Kate isn’t copping to it, Not-Nicole suggests it was likely Tony. She’s gotta get used to sharing space. As Ben and Ciara are hiding under the bed, they overhear Kate say that Stefan had nothing to do with their kidnapping.

‘Days of Our Lives’ spoilers: Xander in the hot seat

Speaking of the kidnapping, John and Hope are still looking into it. They drop by Casa Kiriakis to speak with Xander. They say there’s evidence that places him at the scene of Ted Laurent’s (Gilles Marini) murder. They’re interrupted by a call that Xander says he needs to take. He listens to a message from Kristen claiming he’s responsible for shooting Ted and decides self-preservation is in order. He agrees to take a deal to tell all he knows.

‘Days of Our Lives’ spoilers: Brady to the rescue?

Meanwhile, poor Chloe Lane (Nadia Bjorlin) is getting guests lists from both Marlena and John for their conflicting surprise parties. She confesses the situation to Brady Black (Eric Martsolf) who promises to help.

NBC ‘Days of Our Lives’ Spoilers: Is a Chandler Massey (Will Horton)…