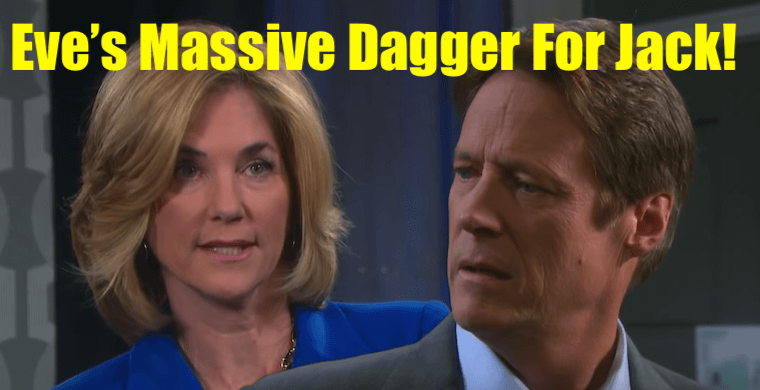 ‘Days of Our Lives’ (DOOL) spoilers for Wednesday, August 14 indicate that Jack Deveraux (Matthew Ashford) will flip his lid over an article that was apparently written by Jennifer Horton (Melissa Reeves). He will not like the picture that was painted of him, so off he’ll go to Jennifer to confront her about making him look like the bad guy. Jenn, however, will maintain that it’s all in a day’s work and while yeah sure she still has feelings for him, she can’t let that get in the way of journalistic integrity. Also, things haven’t been rosy between those two for awhile, and maybe getting rid of Eve Donovan (Kassie DePaiva) was a first step in the right direction, the fact of the matter is, Jack’s been working for this article for awhile, so he will have to lie in the bed he made.

And Jenn won’t be the only one who has that opinion. Adrienne Kiriakis will share it as well. In fact, she’ll jump in and try to defend Jenn against Jack for simply doing her job, Even so, she’ll still try and keep peace between the two. Adrienne knows that memory or no memory, these star-crossed lovers aren’t meant to be apart for very long so let’s not say anything that we’ll regret later. Well, we can only hope that that’s her line of logic anyway. (Us old school Jack and Jenn shippers are waiting with bated breath over here!)

‘Days of Our Lives’ Spoilers: Eve prepares for battle

Speaking of Eve, she’s busily prepping for a legal battle with Jack and she goes to Justin Kiriakis (Wally Kurth) for help. She wants to file a lawsuit against Jack for wrongful termination, but we all know that that would be a waste of a filing because Jack was within every right to fire her after she made the Salem PD into such a circus. Also, she probably wants to make sure that she royally takes Jack to the cleaners during their divorce. Eve wants someone to cover her in court, but that may take some convincing on her part for Justin to do it. No word yet on exactly what that will entail.

‘Days of Our Lives’ Spoilers: Tripp has caught feelings! Haley continues to hide things from JJ

Meanwhile, poor Tripp Dalton (Lucas Adams) will be in quite a pickle. As it turns out, he has feelings for Haley Chen (Theia Megia), yes, those kinds of feelings and it’s really bugging him. Fortunately, Stepmom Kayla Johnson (Mary Beth Evans) to the rescue for this one! She’ll allow him to get what’s bugging him off his chest, it’s always good when Step Moms are supportive, don’t you agree? Meanwhile, JJ Deveraux (Casey Moss) will worry about Haley because she gets fall at the loft. He’s worried that she’s not telling him everything and being secretive – which, she is, but he doesn’t know that yet. Will that be addressed? Stay tuned!!!