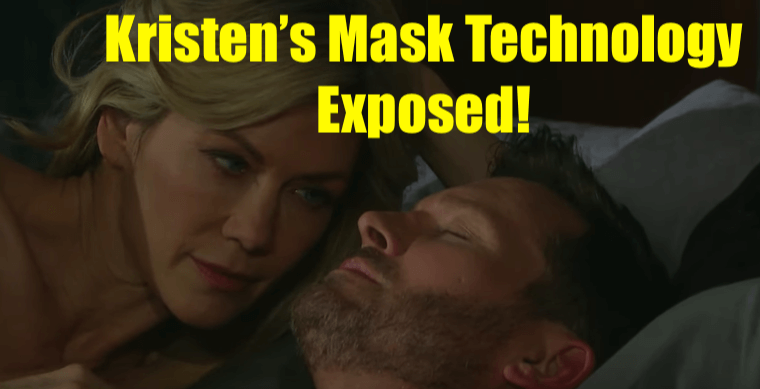 ‘Days of Our Lives’ (DOOL) Spoilers finds that as we all know, Kristen DiMera (Stacey Haiduk) has been masquerading as ‘Nicole Walker’ (Arianne Zucker) with the use of a mask to get with Brady Black (Eric Martsolf), and it worked. However what we don’t know is how on earth Brady didn’t realize that ‘Nicole’ was wearing a mask the entire time!

Apparently, Dr. Wilhelm Rolf (William Utay) ‘state of the art’ technology made this mask and it can convince everyone in Salem that Kristen is really ‘Nicole’, okay sure on the surface and when you’re not up close and personal, sure, but Brady got very up close and personal with ‘Nicole’ in the past week and I for one, am at a loss as to how he didn’t figure it out.

There are face masks that look surprisingly realistic, ask anybody who’s into theater and costume design, but ultimately, they feel like a mask. A mask is rubber, and definitely doesn’t feel like someone’s actual skin. Also, even with the best stage pro esthetics, masks often have to have adhesive and regular old makeup adhesive, even the kind used for stage makeup, often would not stand up under certain intense, and uh, intimate situations. The fact that this mask stood the test of time during ‘Nicole’ and Brady’s hook up is kind of amazing to say the least.

So how is this mask that convincing? It’s not. This is what you call good spy craft. According to Joanna Mendez, the former CIA Chief of disguise that good spy craft is a bit like method acting. You have to feel really comfortable in the role of the identity you are given in order to convince the general public that you are that person.

Now keep in mind that she didn’t say you had to like the identity, you just have to feel really comfortable inhabiting it, and Kristen paid attention in those DiMera lessons in espionage, let me tell you! She was committed to the craft, even in the most intimate of situations, and let me tell you that takes some talent. There are lots of FBI Agents who don’t even graduate to that role. A mask can do wonders for the moment, but in order to do what Kristen did, you have to have some chops.

But getting back to the mask, perhaps Dr. Rolf’s technology could be marketed. I know for a fact that he could make a killing on Tindr alone by marketing his mask technology. However, since we live in the middle of call-out culture, then we’d have all sorts of people posting on social media about ‘how to tell if it’s a mask’, so perhaps Dr. Rolf is right to keep his techniques a secret. After all, some things should remain hidden in the DiMera vault of tricks. Still, if he was going to market to the tindr crowd, does he have that technology available for the whole body? Come on, Dr. Rolf, get on it!