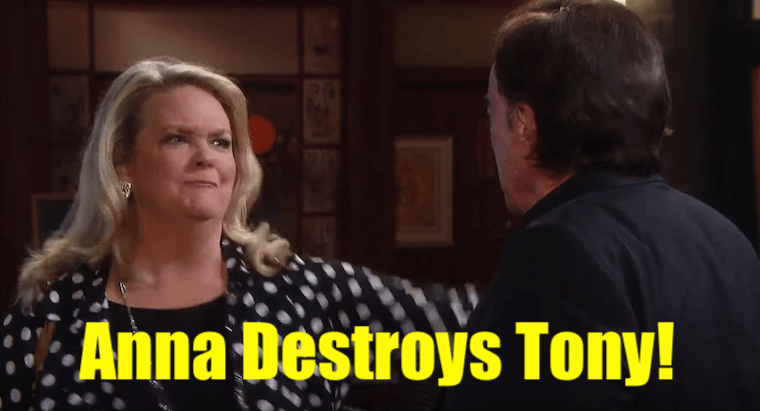 ‘Days of Our Lives’ (DOOL) spoilers for Monday, August 12 indicate that it looks like John Black (Drake Hogestyn) will be planning a romantic evening for his beloved Doc, Marlena Evans (Deidre Hall). Little does he know that great minds think alike because she is planning the exact same thing for him just in time for their anniversary. The awkward thing is, they’ll both invite some of the same people to two separate parties, which will cause a lot confusion down the line. Woops! Oh well, they say the road to hell is paved with good intentions, and I guess those two will find that out soon enough!

Anna DiMera (LeAnn Hunley) will announce to Kate Roberts (Lauren Koslow) and Roman Brady (Josh Taylor) that she’s in town for a final goodbye to her husband, Tony DiMera (Thaao Penghlis), but they’re about to drop the bomb of a lifetime on her! Apparently everyone, except for those two, neglected to tell Anna that Tony is actually alive? Poor Anna will be furious and feel like she’s been mourning for no reason all this time, she’ll also wonder why he’s moved on with this new, younger woman ‘Nicole Walker’ (Arianne Zucker) instead of coming immediately to find her!

Days of Our Lives Spoilers: Tony’s in too deep and Chloe worries about ‘Nicole’.

But little does Anna realize that Tony’s very eager for this reunion, he’s just kind of sidetracked with one of Kristen DiMera’s (Stacey Haiduk) plans right now. Initially he demanded a divorce from Kristen so that he and Anna could reunite, but then Kristen went and did that thing that she’s ever so fond of and threatened Anna’s life.

After that, Tony backed down from his divorce demands in order to keep Anna safe. However, Kristen has bigger fish to fry – it seems that ‘Nicoles’ bestie is concerned about her erratic behavior recently and will have Marlena approach ‘Nicole’ about having a bit of a ‘grief counseling’ session.

Days of Our Lives spoilers: ‘Nicole’ snaps and Tony, you’ve got some splainin’ to do!

However, ‘Nicole’ will be less than receptive to such a thing and will probably attack Marlena on the spot for even suggesting such a thing. Whatever her reaction, it certainly won’t be ‘Nicole’-like in the least because Kristen’s own distaste and hatred for Marlena will come through. Geeze, its becoming harder and harder for her to fit into this ‘role’.

Meanwhile, Tony will see Anna’s face for the first time in years and his heart will practically skip a beat. Looks like Anna won’t be that happy to see him, in fact we’re long overdue for a lover’s quarrel between the two and it looks like we’ll get it. What will the outcome be? Stay tuned!!!