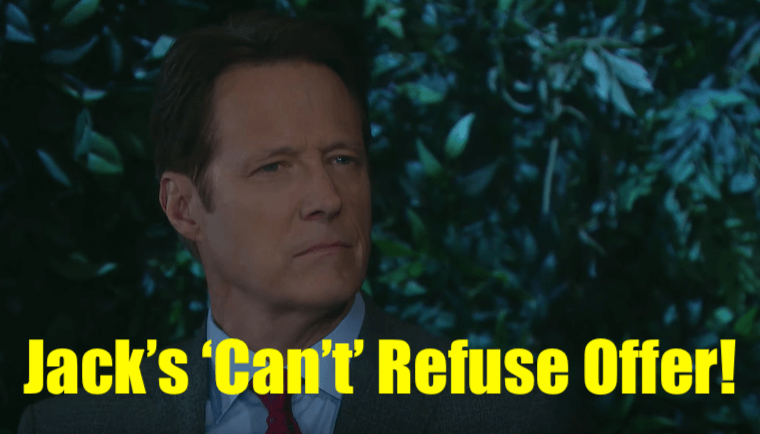 Days of Our Live spoilers: Going it alone—sort of.

Haley is still having trouble sleeping, but she’s much better since Tripp gave her those pills. She’s not hallucinating at all, or having those nightmares. When JJ calls before starting a night shift, she doesn’t let on that she’s dreading sleeping alone in Claire Brady’s (Olivia Rose Keegan) old room. Tripp suggests she come clean, but she won’t worry JJ like that. She’s already caused him enough stress between her immigration situation, getting him kicked out of his apartment, and the times he had to save her butt. If she won’t tell him and is too uncomfortable sleeping in that room, Tripp offers to let her sleep in his while he takes the couch. She eventually agrees after some arguing.

Days of Our Live spoilers: War of the roomies

That night shift that JJ was going to work gets cancelled, so he returns home. Haley, hearing his voice, comes down from Tripp’s room. Unfortunately, she’s groggy from the pills and passes out, falling most of the way down the stairs. JJ wants to know why she was coming from Tripp’s room, but he’s more concerned right now with Haley. She explains hearing his voice, which brought her back down, but she’s not quite right. He’s worried she may have a concussion, so he brings her to the hospital.

That’s why things get real. Tripp, after Haley stumbled over some of Kayla’s questions, convinces Haley to tell the truth. Kayla Brady (Mary Beth Evans) is disappointed, as she feels JJ was being irresponsible and unethical with giving Haley those pills. We’re thinking it was probably illegal as well, considering he got them by prescription under his name. JJ is livid. He attacks Tripp, and this is so going to end well.

Julie Williams (Susan Seaforth Hayes) is in bitch mode today when Eli Grant (Lamon Archey) and Lani Price (Sal Stowers) come by. She says she’s, in fact, not proud of Eli’s new job. Turns out, she’s just a little hurt that she had to find out about his engagement from other sources. Eli feels bad, but Julie says all will be forgiven if she can throw him and Lani an engagement party. They agree.

When she finds out there’s an event booked the same night, she gets upset with Chloe Lane (Nadia Bjorlin) for booking without informing her and decides to cancel the party. Lani and Eli insist that isn’t necessary. They can pick another day. Wait until Julie finds out it was for John Black (Drake Hogestyn) and Marlena Evans’ (Deidre Hall) anniversary party…

Days of Our Live spoilers: The truth hurts

Jack learns from Melinda that Jennifer wrote yet another glowing article about him and his administration. She is gloating over this, but Jack advises her not to get too judgmental. Afterall, she’s the one who let her own daughter live in constant fear of deportation because she wouldn’t just be honest about being Haley’s mother. Hearing Melinda get called out for that never gets old. Seriously.

Jack is enraged by the article that his administration is nothing but a chaotic, incompetent mess that no one wants any part of. He confronts Adrienne Johnson (Judi Evans) about the article, interrupting a chat with Kayla about Steve Johnson (Stephen Nichols). Kayla had still felt guilty about her part in Steve leaving and was worried he might not ever come back. For the record, Adrienne want to smack both of her brothers. Ha!

Anyway, Adrienne counters that everything Jennifer said in the article was true and there will be no retraction.

Days of Our Live spoilers: A woman scorned

Eve Donovan (Kassie DePaive) hits a new low today. She goes to Justin Kiriakis (Wally Kurth) to ask for his help in a suit against Jack. He’d heard about their divorce, but he’s not wanting to get involved. After all, Jack is still family.

Determined to get him as her lawyer, she has the nerve to actually accuse Jack of rape, then get offended when Justin questions whether that is true. After all, he has history. Justin points out that she does, too, and demands she look him in the eye as she accuses Jack. False accusations are a big reason for people not being believed.

Eve eventually admits that she was making that whole thing up. She’s just hurt over losing everything, and tells him she really did come to love Jack a lot. Like most of her relationships, everything fell apart. Justin suggests that she is self-sabotaging because of self esteem issues. She thinks that’s psychobattle nonsense, but he disagrees.

Days of Our Live spoilers: Sold

Jack and Jennifer have what is probably fight #10495978836970894 since he returned to Salem. And once again, it’s about the same thing—Jack being a crap person. He had confronted her about the article. She asserts every word is true. He never should’ve hired Eve to start with, and no one has wanted to work with him. He brings up Eli, but she says it’s only a matter of time before he also jumps ship.

While they fight, Melinda happens along. He offers her the job, and she scoffs. He’d made her daughter’s life hell. He offers her a raise, and she accepts without missing a beat. It’s awesome, especially the look on Jennifer’s face as she watches this.