‘Days of Our Lives’ Spoilers Friday, August 16: Kristen Busted By Ben and Ciara! 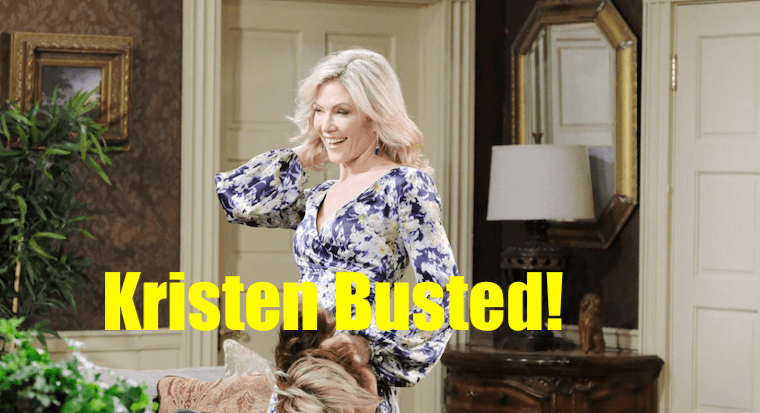 ‘Days of Our Lives’ Spoilers: Xander gets himself out of hot water, only to throw ‘Nicole’ in!

‘Days of Our Lives’ (DOOL) Spoilers for Friday, August 16 indicate that Xander Cook (Paul Telfel) will have to switch gears if he wants to avoid taking the murder rap for Ted Laurent (Giles Marini), he can’t let Kristen DiMera (Stacey Haiduk) throw him under the bus so he tells John Black (Drake Hogestyn) and Hope Brady (Kristian Alfonso) one version of the story.

A version that makes ‘Nicole’ Walker (Arianne Zucker) look really bad and maybe even gets her into trouble but he does not mention anything about Kristen. So perhaps his skin will be safe – for now.

‘Days of Our Lives’ Spoilers: Ben and Ciara witness Kristen’s deal with Kate

Meanwhile, Ciara Brady (Victoria Konefal) and Ben Weston (Robert Scott Wilson) will still be stuck underneath ‘Nicole’s’ bed, listening in and getting all the information they can about her. They now know that Stefan DiMera (Brandon Barash) is not the one that kidnapped Kate Dimera (Lauren Koslow) and Ted Laurent, rather, it was Kristen! They’ll also be on-hand to ‘witness’ (as best you can while underneath a bed) Kristen’s little agreement with Kate. The two will know they’re onto something.

Kate and ‘Nicole’ will team up against Gabi Hernandez (Camila Banus), but we all know that Gabi is not going down without a fight. This will result in a fierce battle between the two, and there may potentially be a partial (or even a full) face reveal of who ‘Nicole’ really is. Of course Kristen will know that the jig is up now and she will proceed to knock Gabi out. When Stefan rushes in to save his lady love, he’ll suffer the same fate! Well, that’s something to tell the Grandchildren! If they survive long enough to have them.

‘Days of Our Lives’ Spoilers: Anna plans a wedding

Anna DiMera (LeAnna Hunley) will reveal her plot to get married to Roman Brady (Josh Taylor) and surprise both he and Tony DiMera (Thaao Penghlis). Apparently neither one counted on this, especially not Roman, he just wasn’t sure that getting married was in his schedule today but it seems that he’s ultimately in on the joke and realizes what Anna is doing. He’s rooting for Tony and Anna as much as the rest of us and has decided to play along with Anna’s wedding game as long as it brings these two crazy kids back together. That’s… sweet? How will this unfold? Stay tuned!!!