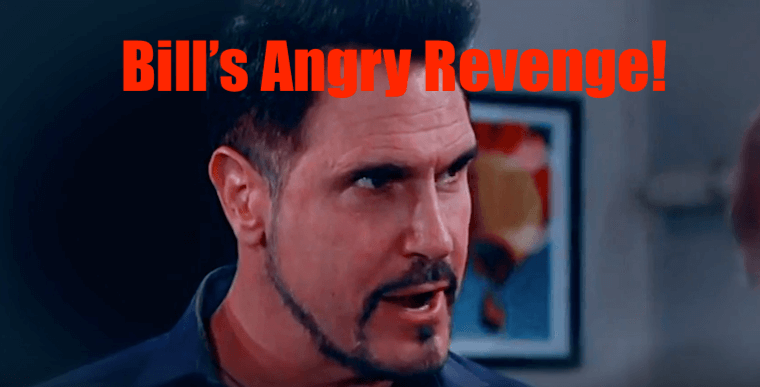 ‘Bold and the Beautiful’ (B&B) Spoilers for Monday, August 26th, 2019 indicate that Ridge Forrester (Thorsten Kaye) arrived at the Cliff House just in time to get the wrong idea about what he just witnessed. Thomas Forrester (Matthew Atkinson) who had been hotly pursuing Hope Logan (Annika Noelle) was getting crazy when Brooke Logan (Katherine Kelly Lang) arrived first and tried her best to get Thomas to get away from her daughter before one of them got hurt – and succeeded beyond her wildest dreams!

Thomas went off the edge of the cliff to the rocky beach below! Now we all know that Brooke wouldn’t actually want to hurt Thomas, after all, she’s technically his step Mom and raised him for years, she just didn’t want him to hurt Hope. But from Ridge’s vantage point it’s going to look like she meant to throw him off that cliff. Yike!

‘Bold and the Beautiful’ Spoilers: Welcome to the madhouse, Dr. Jordan Armstrong!

However, both Brooke and Hope will want to see if Thomas is alright and they will both race to the bottom along with Ridge to make sure that he’s still in the land of the living. Ridge will get there first and be tending to Thomas while Hope calls 911 and Brooke just looks on in horror. Thomas will be rushed off to the hospital and treated for his life-threatening injuries. Luckily, Dr. Jordan Armstrong (Vincent Irizarry) will be on-hand to treat Thomas, considering the distance he fell, it’s going to be rough going for awhile – for everyone, Logan and Forrester alike. (This will also mark the first air date of Vincent Irizarry – let’s all have a round of applause and welcome him to the madhouse!)

‘Bold and the Beautiful’ Spoilers: Bill Spencer wants to make everyone pay

Meanwhile, we all knew it was only a matter of time before Bill Spencer’s (Don Diamont) appetite for revenge won out. He originally had ‘his guys’ out looking for Dr. Reese Buckingham (Wayne Brady), but fortunately for Reese, Scotland Yard found him first. Flo Fulton (Katrina Bowden) has also been taken into custody as well. But will that stop Bill Spencer? Nope. He’s only just beginning! Since no one messes with a Spencer and gets away with it, he’ll probably go and impress this upon the DA and make sure that those two are prosecuted to the fullest extent of the law and that there is no possible way for them to find a loophole out of their sentences. Justice is swift and sure for Bill! Eek!

‘Bold and the Beautiful’ Spoilers: Flo and Thomas are first on Bill’s list

He’ll be focusing on Flo in particular because he’s afraid that since she’s cooperating with the law that they may let her go free and just prosecute Reese, so he wants to make sure that does not happen. And he’ll also want to make Thomas pay, but, in all honesty Bill, that may just be overkill because it looks like you won’t have to worry about Thomas. Karma got him for you instead! However, Bill ment what he said about nobody messing with a Spencer, so maybe there needs to be someone there to like… guard Thomas’s room? Come on man, the guy just went off the side of a cliff, what more do you want? Will Bill see to Thomas’s demise? Stay tuned!!!

CBS ‘The Bold and the Beautiful’ Rumors: Steffy and Liam Get Intimate –…

CBS ‘The Bold and the Beautiful’ Spoilers: Star Denise Richards Shares An…

CBS ‘The Bold and the Beautiful’ Spoilers Update: Thomas Stops…