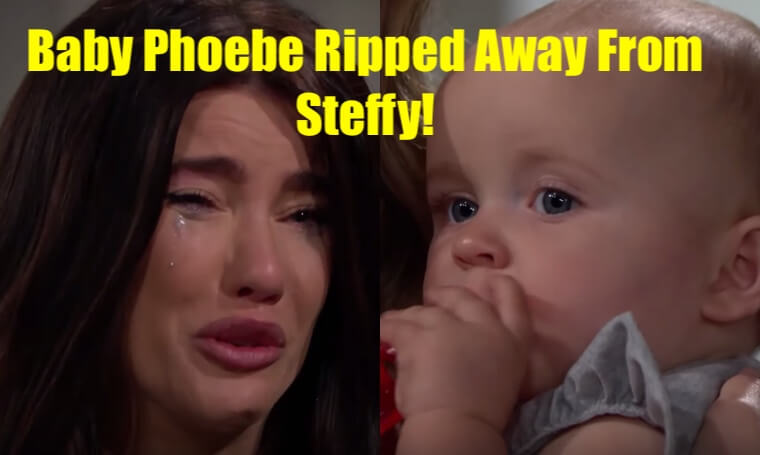 ‘Bold and the Beautiful’ (B&B) spoilers for Monday, August 12th, 2019 indicate that Hope Logan (Anika Noelle) is finally getting Baby Beth (River Davidson and Madeline Valdez) back, but poor Steffy Forrester (Jacqueline MacInnes Wood) will be feeling the hurt. Steffy has been ‘Mom’ to little Beth for the first few month of her life and of course she doesn’t want to let go of the baby girl that she has come to know as ‘Phoebe’, but logically she knows that the child is not hers and she really has no legal claim to her.

Steffy pleads for just a little more time so that Beth won’t be uprooted from the only home she’s ever known but Hope has been separated from her baby girl long enough and won’t even consider the idea. Dad Ridge Forrester (Thorsten Kaye) is there for Steffy, fortunately, but a Dad can only do so much. He won’t be able to ease the pain of having to let her baby girl go.

Meanwhile, Wyatt Spencer (Darin Brooks) is having to eat some crow. He offers Sally Spectra (Courtney Hope) and apology for how he acted toward her at the end of their relationship. (Is anyone else laughing as hard as I am at this point? Just me? Okay.) He got all bent out of shape over her having a teeny tiny little secret with Thomas Forrester (Matthew Atkinson), but didn’t understand that he was falling for the girl with the biggest secret of all, WITH THOMAS! Hah!

‘Bold and the Beautiful’ Spoilers: Shades of ‘Wally’, anyone?

He’ll have to sheepishly admit to Sally what Flo Fulton (Katrina Bowden) did to him and let me just tell you, Sally is a much better person than I would be about it. Instead of staring at him for a full minute and a half in disbelief, then bursting out laughing and crowing about how Karma is something that rhymes with witch, she’ll act genuinely shocked and dismayed by this news.

Perhaps she’ll have a bit of sympathy for Wyatt, after all, she did love the guy at one time. Perhaps this is a nod to them getting back together eventually? It won’t be instantaneous (because I guess Wyatt has learned his lesson, that it should take longer than a minute and a half to grieve a relationship) but there might be a little hope there. And what will Mom Quinn Forrester (Rena Sofer) have to say about all this? Where is she? Is she off orbiting in space with Taylor? Guess we’ll have to stay tuned!!!