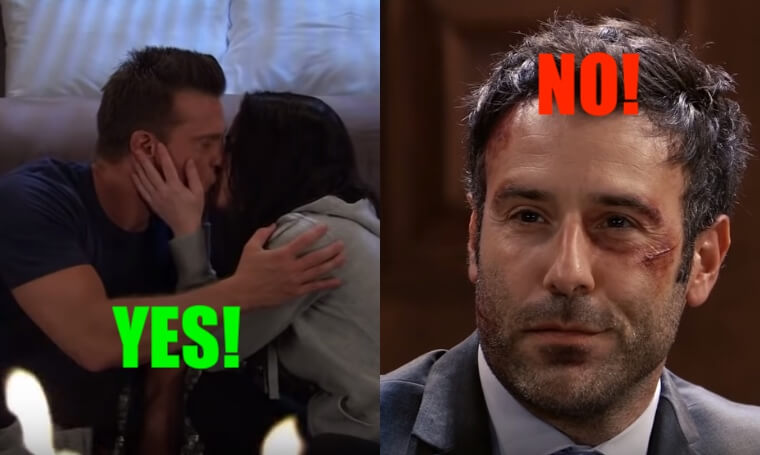 General Hospital (GH) Spoilers for Monday, July 1st indicates that Jason Morgan (Steve Burton) is having some problems allowing Sam McCall (Kelly Monaco) to be involved in the mess that Shiloh Archer (Coby Ryan McLaughlin) has created any longer. He doesn’t want her getting hurt, but Sam insists that she can handle herself. Either way, they’ll refocus their attentions on each other for awhile and there’s a good chance for some JaSam scenes. Yay!

Overconfidence is not a good look for Shiloh! Pride always come before a fall, Shiloh!

As per usual, our favorite cult leader, Shiloh, is feeling cocky and overconfident. He’s certain that he knows exactly where his son is, and he will be so confident that he’ll get on the phone with his lawyer and tell them all about it. He even thinks he knows where to find DNA proof! Shiloh is going to be in for a rude awakening when he realizes that Willow was telling the truth and the baby, unfortunately, did pass away.

Poor Brad Cooper (Parry Shen) is so freaked out that he’s secretly planning to get passports from Julian Jerome (William deVry). He doesn’t tell Michael Corinthos (Chad Duell) about this, nor does he tell him just how hot Shiloh is on his trail about the kid. He does however, tell him that keeping Wiley may be easier said than done, and what Michael does with that information will remain to be seen.

Detective Harrison Chase (Josh Swickard) will tell Mac Scorpio (John J. York) about what a horrible guy Shiloh is, and how he is after Willow Tait (Kate MacMullen). Forunately, Mac will understand and will agree to help the good detective. With a veteran like Mac around, the stakes have definitely been raised and Shiloh has his work cut out for him.

‘General Hospital’ Spoilers: Maxie has a dilemma and when did Robert Scorpio get a law degree?

Meanwhile Maxie Jones (Kirsten Storms) will have a problem to solve. It doesn’t look like it has anything to do with Dante Falconeri (Dominic Zamprogna), so she will tell Lulu Falconeri (Emma Rylan) all about it. They’ll figure out a plan together to solve it, and while they’re at it, Laura Webber (Genie Francais) will also offer some Motherly advice on the matter.

Laura will also turn to Robert Scorpio (Tristan Rogers) and ask him about bringing Dante home to his family. She thinks that Robert, with his WSB connections, can definitely make this happen. But Robert may or may not have the time, because as it turns out he’s been promoted—to DA! Who knew that Robert went to law school?

Poor Drew Cain (Billy Miller). He has been so strong for Dr. Kim Nero (Tamara Braun), but there’s no denying that he’s a grieving parent as well. He hasn’t really expressed his sorrow as far as losing Oscar yet, but today he will get the chance. Fortunately for him, his buddy Curtis Ashford (Donnel Turner)

will be around to lend a listening ear. Sometimes even Dads need to grieve. Will Drew have any regrets? Stay tuned!