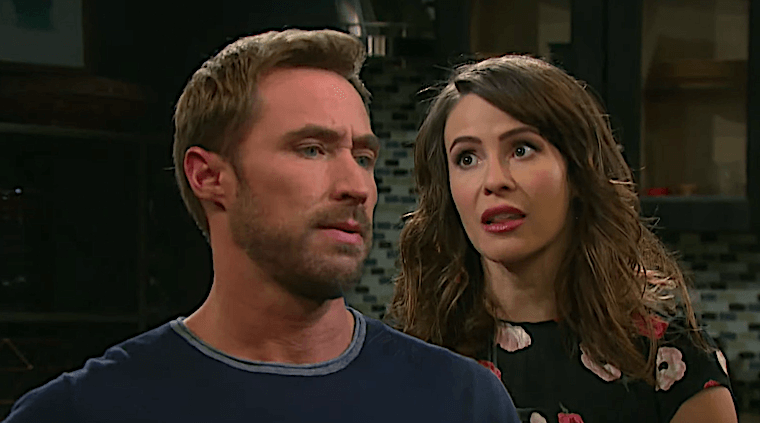 ‘Days of Our Lives’ (DOOL) spoilers for the week of Monday, July 8 to Friday, July 12 indicate that we’ll wave farewell to some of the Salem crew for good. Hope Brady (Kristian Alfonso) will be closer to finding out just what happened to her man, Ted Laurent (Gilles Marini). Also, Eve Donovan (Kassie DePaiva) will rack up a few more enemies! Just another week in Salem!

When we last left Kate Roberts (Lauren Koslow) and Ted Laurent (Giles Marini), things were getting pretty heated between them. They used to be together, so it’s not that far-fetched that being in close- quarters and stressful situations with each other would bring up some old feelings.

In a normal situation, this would be a one-time “let’s not mention this again” thing, but they didn’t count on being caught by “Nicole”, AKA, Kristen DiMera (Stacey Haiduk) and I guess they aren’t the only ones being caught with their pants down. Kristen will accidentally reveal her identity to them! She’ll also be busy browbeating Xander Cook (Paul Telfel) over the fact that Ted Laurent is not, in fact, ‘dead and buried’ like he previously told her.

Kristen isn’t the only one letting Xander have it. Hope Brady (Kristian Alfonso) will also have her chance at bat. She and Eli Grant (Lamon Archey) will figure out what’s going on and will go after him and “Nicole”. At the end of the week, Hope will follow Xander to the secret room. But what will she find there, will she find Kate and Ted locked in another embrace? For her sake, let’s say it ain’t so. But it looks like this won’t be such a one-time hook up for the former lovers. Ted will confess something to Kate that is a major revelation. Is this the start of a love-triangle? Looks like it might be!

Claire Brady (Olivia Rose Keegan) is taking her final bow, she’s leaving Salem to finally go get the help she so desperately needs. Her parents, Shawn Brady (Brandon Beemer) and Belle Black (Martha Madison) are understandably upset over their daughter’s condition and just how badly she’s needed help for such a long time. But at least she’s getting it, and maybe someday when she’s back on her rocker, she’ll return to Salem, but that might be quite awhile from now.

In the wake of Claire’s departure, a lot of eyes will turn to Eve Donovan (Kassie DePaiva), she was the one who had the most insight to Claire’s condition and she did nothing. In fact, she may have just exacerbated the whole thing by playing along with Claire’s desires. Hope and Ciara Brady (Victoria Konefal), and Marlena Evans (Deidre Hall) will all go in on her this week at different times for her role in Claire’s downfall. If you thought everyone hated Eve before, then you ain’t seen nothing yet!

‘Days of Our Lives’ (DOOL) Spoilers: Stefan and Gabi Amp It Up

The one good thing about Claire’s leaving is that now, Ben Weston (Robert Scott Wilson) and Ciara can be together unencumbered. There will be no Claire lurking around the corner to try and frame Ben for her crimes, and Ciara won’t always have to be looking over her shoulder because she (or any other woman for that matter) accidentally looked at Tripp Dalton (Lucas Adams), they can both move on and be free. Finally! Does this mean a potential baby on the horizon for the #Cinship? As long as there is no one stopping them from escalating their romance to the next level, it looks to be a possibility.

Julie Williams (Susan Seaforth Hayes) will be shocked and disgusted to find Gabi Hernandez (Camila Banus) and Stefan DiMera (Brandon Barash) going at it in her office! She’ll be rightfully outraged and most probably, at the very least, order them out. Meanwhile, Brady Black (Eric Martsoff) will tell Chloe Lane (Nadia Bjorlin) all about Gabi’s conspiracy against Stefan. However it doesn’t look like the bomb dropped will do that much damage, Gabi and Stefan are in luuuurve now.

Poor Tripp Dalton, after everything he’s been through, he deserves a break. Once Claire leaves, he will be free to reconnect with Haley Chen (Thia Megia) and he’ll even go so far as to get some new roommates. Who are they? Why, Haley and JJ Deveraux (Casey Moss) of course! In spite of their once

upon a time rivalry over Haley, Trip and JJ seem to be cool with each other now. Will it remain that way? Only time will tell.

Sarah Horton (Linsey Godfrey) is in for some trouble, it would seem. (We knew this happy marriage thing was too good to be true, right?) Not only does her hubby Rex Brady (Kyle Lowder) make a major, troubling confession to her that will send shockwaves through their brand new marriage, but her Mom, Maggie Horton (Suzanne Rogers) is struggling with her alchohol addiction again. When it rains it pours! What will Sarah do? Stay tuned!!!