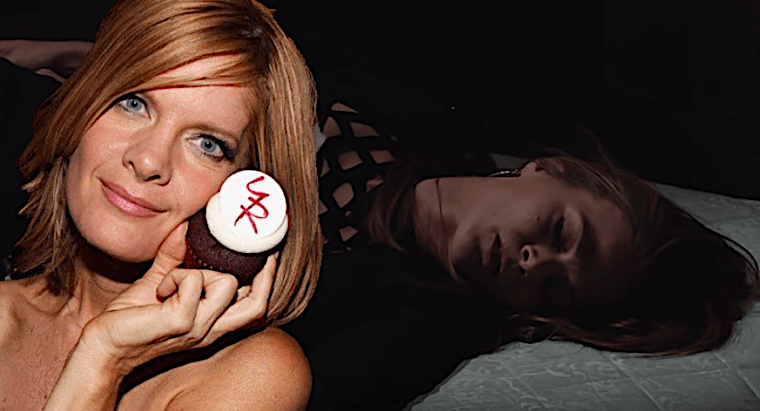 It begins at Sharon’s apartment, where she tells Rey she feels bad that he slept on the couch. Sharon wants to know if this is the end of their relationship. Rey reassures her that it’s not, but that he just doesn’t feel comfortable with what’s been going on with Adam. All Rey wants is for Sharon to be honest. Sharon admits that she cares for Adam, but also thinks that Rey might be overexaggerating the situation between them.

At the tackhouse, Adam reserves a hotel suite. He gets another phone call from Kevin, who asks “Where is she?” Adam claims that he doesn’t know and is visibly irritated. He wants Chloe Mitchell. Kevin then yells over the phone that Adam will wish that he were really dead if he doesn’t get her by the end of the day. Adam doesn’t seemed phased by this threat at all but agrees to meet up with him.

At the Dark Horse, Adam doesn’t seem like he’s scared at all of Kevin and his threats. Kevin tells him that he can access all of his personal information and make his life hell at the same time. Adam says that if Kevin pulls a fast one on him, he will be forced to retaliate. Adam then says that he wants Phyllis Summers (Gina Tognoni) back and that she shouldn’t have been dragged into this mess to begin with.

Kevin then strikes a deal with Adam. He agrees that he won’t leave Genoa City and that he will help Adam out whenever he needs him. Michael (Christian LeBlanc) then arrives. Michael has no idea what is doing on and why Kevin would be with Adam Newman. Kevin refuses to tell him why. Michael thinks something is going on, but Kevin insists that there’s nothing to worry about.

At Society, Mariah (Camryn Grimes) makes an announcement. She’s the new head of Power Communications. Sharon is happy for her. Mariah learns that Rey is upset over Adam. Sharon tells Mariah that Adam still has some left over feelings for her. Mariah is concerned that Adam might get in between Rey and her mother.

Jack and Lauren are in Los Angeles. They flirt and admit that they make a pretty good duo before toasting to their own success. They then talk about all of the likes they get on social media. Jack suggests that they stay in Los Angeles a little bit longer. He then tells Lauren that it’s time he makes some changes in his life. Kevin enters the room where Phyllis is supposed to be, but realizes that she’s escaped out of the window. Michelle Stafford will be Phyllis next time we see her.