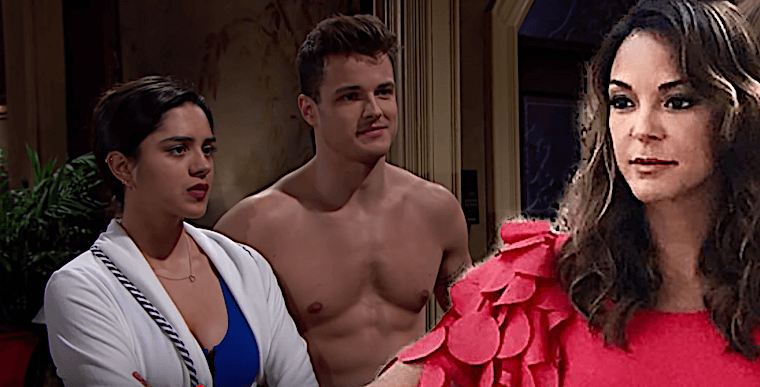 ‘Young and the Restless’ (Y&R) spoilers indicate that things are going to get quite interesting in Genoa City now that Mama Rosales (Eva LaRue) will be in town! As a matter of fact, there’s speculation that Mama Rosales might be the one who will stop her daughter Lola Rosales (Sasha Calle) from getting married to her one and only love, Kyle Abbott (Michael Mealor). Here’s what you need to know.

‘Young and the Restless’ (Y&R) Spoilers: Mama Rosales Blocks Lola From Marrying Kyle! What You Need To Know About Celeste’s Genoa City Debut!

For months now, Kyle has been trying to prove himself to be a worthy guy for Lola to her two brothers, Arturo (Jason Canela) and Rey (Jordi Vilasuso). At first they didn’t want to give him a chance but finally caved in, realizing that Kyle did everything he could do save Lola when she needed her liver transplant.

And while Summer Newman (Hunter King) was willing to do her part to save Lola’s life, it came with a price. Kyle was forced to marry Summer just so she could donate her liver to Lola. It seemed that no matter how hard Kyle and Lola tried to be together, there was always something or someone getting in their way.

Now that Arturo is in Miami, Rey is dealing with all of the Adam Newman (Mark Grossman) drama and Summer has a new man waiting in the wings for her, Lola and Kyle can finally enjoy their romance. However, things will turn pretty dramatic in the coming weeks.

That’s because Lola’s mother will be in town after having heard everything that has been going on from Arturo and Mia (Noemi Gonzalez), now that the two of them are back in Miami. There is no way that Mama Rosales will allow her one and only daughter Lola to marry Kyle, especially knowing all that he’s done in the past. Kola fans can prepare for one huge battle once again!

‘Young and the Restless’ (Y&R) spoilers tease that Mama Rosales isn’t coming to town just to congratulate Lola and Rey on their new-found relationships. Mama bear is coming to Genoa City to wreak havoc and be the overbearing mama that she’s always been, but that we just haven’t seen yet.

Kyle, in particular, better get ready since he did consummate his marriage to Summer Newman when he was supposedly in love with Lola. Mama Rosales won’t be too thrilled with that decision, nor will she be with the fact that her little girl lost her virginity. Mama Rosales will see that as a move to please Kyle since she was competing with a girl that has very obvious loose morals when it comes to men.

Rey and Sharon won’t be spared Mama Rosales’ wrath either since Sharon has got her son involved in numerous schemes that could land him in jail. One thing’s for sure, Mama Rosales is coming to town and bringing that Miami-style drama to Genoa City so things are sure to get real interesting!