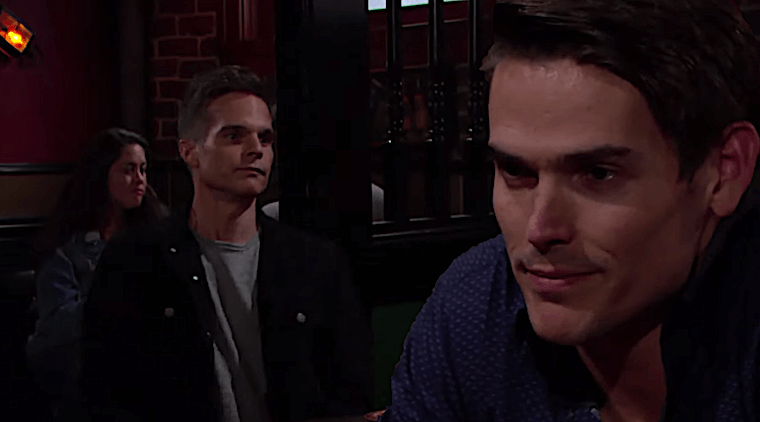 It begins at Nick Newman’s (Joshua Morrow), where Summer tells her father all about her mother’s behavior. She can’t believe the way she acted at Jack Abbott’s (Peter Bergman) house. Nick thinks that Phyllis is acting out in revenge. Later on, Nick tells Christian’s nanny to be extra careful because there’s a good chance that Adam might be watching their every move. He also says that he’s decided to hire a bodyguard and a driver for Christian and his nanny.

At the tackhouse, Adam gets a text message. He doesn’t know who it’s from, but the person says that they have what he wants. Adam tells the mysterious person to tell him where to go and he will be there.

At the pent house, Devon and Elena are flirting. Elena tells him that she’s interviewing for a position in Genoa City, which means that she won’t be moving out anytime soon. Devon seems to be happy. Afterwards, Elena gets an email congratulating her own paying off her student loan debt. Devon says that he did it because he wants to pay it forward in his life from now on.

Elena is angry and lashes out at Devon for doing something like this without her consent. She doesn’t like it that he was meddling in her finances and adds that he doesn’t know her at all. Devon takes a step back and says that she shouldn’t feel obligated for dating him just because he paid off her student load.

Devon senses that Elena feels betrayed but says that it was a gift. Elena admits that she feels violated. However, she does tell Devon that his heart is in the right place, but adds that she doesn’t feel comfortable in their relationship.

At Crimson Lights, Summer is concerned about her mother Phyllis. She tells Jack that she can’t reach her at all. Jack feels as though Adam might have something to do with it. Jack tells Summer that she should keep her distance for now, but adds that Phyllis will regret acting like this one day.

Adam arrives at a dive bar and sees Kevin. Kevin says he has what he wants. Adam learns that he kidnapped Phyllis. Kevin offers him a trade: he says that he will give Phyllis back for Chloe. Adam says that Chloe is dead, but Kevin says that he knows Adam tracked her down and wants her back. The two trade jabs until Adam gets a text and leaves. Later, Kevin sits and finishes his drink.