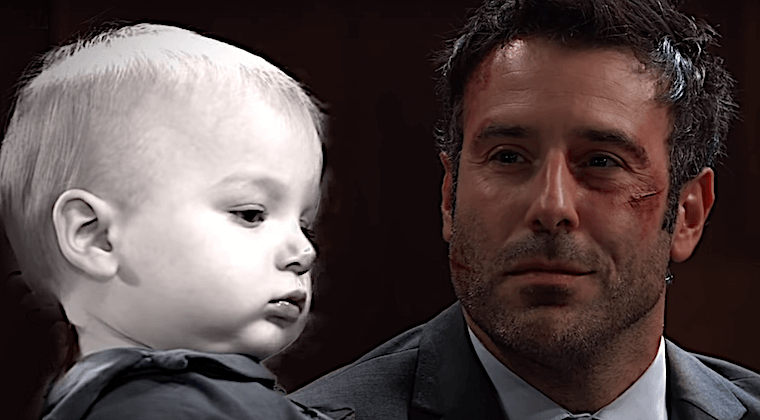 Bobbie Spencer is busy confronting Julian Jerome (William DeVry) about his records stealing when Scott Baldwin (Kin Shriner) comes along. He’s just in time to catch the end of the fight, and Bobbie passing out.
Over at GH, Bobbie is arguing against needing to see a doctor. Lucas Jones (Ryan Carnes) and Scott disagree and Lucas proceeds to check her over. He manages to get her to talk about some symptoms she’s experiencing lately, then orders a test for diabetes. She thinks this is all overkill and promises to take better care of herself. Lucas and Scott aren’t appeased so easily. What is that they say about doctors making bad patients?

Joss is none too happy when Sonny and Carly Corinthos (Maurice Bernard and Laura Wright) have her take their new guest to the park and on a tour of Port Charles. While out, Dev decides to tach her about personal security by taking her phone. The pair are arguing over this when Cameron comes along and overhears that Joss has been robbed. Joss explains that he’s a guest, and we are fascinated by watching the two actors together. Surprising resemblance.

Anyway, having cleared up the misunderstanding, Cameron and Dev bond a bit before catching up with Joss by Oscar’s Meadow. Dev asks about the name, and they explain about Oscar Nero’s (Garren Stitt) passing, as well as the séance. Dev thinks this is hilarious and that there is no beyond. Joss doesn’t appreciate that insight, or the fact that the noise she heard outside was actually Dev watching the place.
In other Oscar-related news, Kim has invited Drew to her place, where she gives him wine, serves favorite food, and talks about their past. And you so know where this is leading. We’ll have to wait for another episode to know for sure, though.

Back at the Corinthos’, some offhand remarks by Mike Corbin (Max Gail) gives Sonny an idea of how to keep Dev around on a more long-term basis. He’s going to be the son of a relative. Carly isn’t too thrilled with this, but agrees after Sonny points out Dev will just take off if he’s sent back to wait for Sonny’s connections to do things the legal way. 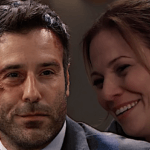 Willow doesn’t take the judge’s order well. After some arguing between Diane Miller (Carolyn Hennesy) and Zahra Amir (Maysoon Zayid), the order to hand over info stands, and Diane is ordered to answer questions herself. Diane refuses and is willing to take the contempt charge to protect her client’s rights. Willow, upset about the ruling and angry with Shiloh (Coby Ryan McLaughlin), throws a fit that would put a kindergartener to shame. Then, she outright refuses to follow the order to provide any info to Shiloh. This leads to Willow being found in contempt instead. Harrison Chase (Josh Swickard) is allowed to perform the arrest, against Shiloh’s objections.

There may be one Dawn of Day related victory today, though. Michael Corinthos (Chad Duell) has chatted up a woman named Carol Lockhart (Mandy Musgrave), the one who took the fall for the overdose case in Beechers Corners. As Jason Morgan (Steve Burton) listens in from the car, Michael lays out the theory about her taking the fall, and Carol, feeling like an idiot, admits that Shiloh did, in fact, ask her to do that. She doesn’t think Shiloh committed murder, though.

Michael lays out all the evidence to support that theory, and Carol is forced to admit that it’s possible. She’s willing to talk on the record. There’s just one problem. She, presumably due to said case, is wearing an ankle monitor and can’t leave town. Jason, who she was just introduced to, says he’s got the fix for that.

Michael is later seen sitting next to the removed bracelet while Jason is getting ready to take Carol out of town. He’s just started the vehicle when a cop recognizes the plate from last time and approaches the car. The guy’s pretty sure he told Jason not to show his face here anymore. And we’re sure there’s about to be a cop with a massive migraine shortly…