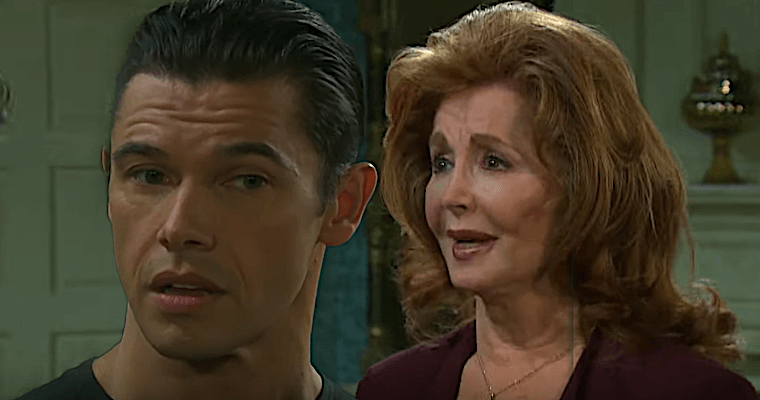 ‘Days of Our Lives’ (DOOL) spoilers for Monday, June 17 indicate that Kristen DiMera (Stacy Haiduk) will have no place to hide —the body that is! In order to keep her plot under raps, she had to give Ted Laurent (Gilles Marini) the old one-two with a fire-poker, but she didn’t think this through.

Now where’s she going to hide him until he wakes up?! So she calls Xander Cook (Paul Telfer). Until he arrives, however, she may just drag Ted to one of the many secret passages in the DiMera mansion and hide him there. Gotta feel a bit sorry for Ted though, because no word on what’s going to happen to him once he wakes up. If she’s employing Xander to keep her secrets safe, then that could be anything, let’s hope he stops short of murder, because I’m pretty sure that Hope Williams Brady (Kristian Alfonso )would notice if her new man went missing.

The funny thing about all this, is that Stefan DiMera (Brandon Barash) and Abe Carver will almost catch her in the act— as Nicole Walker (Arianne Zucker)! Now, wouldn’t this be a fine kettle of fish? Fortunately, it looks like “Nicole” manages to hide Ted before they catch her, but it’ll still be quite a close call for her. Will this start to sound the suspicion bells that something’s not quite right with Nicole?

Meanwhile, Hope and Roman will have a chat, they will talk about how relationships can certainly be complicated and about Hope’s feelings for Ted (so he’s on her mind.), and Roman will provide Hope with some guidance about what she should do. Roman’s a good egg, so any advice he gives will be sound.

Days of Our Lives Spoilers: Maggie Rips Into Xander For His Lies

Maggie Horton (Suzanne Rogers) wises up about Xander, so much so that she’ll outright confront him about all of his lies thanks to Brady Black firing her up. She’ll be grilling him about the diary and if he had it why didn’t he give it up sooner? Of course, we all know that Xander ultimately wants Sarah, Maggie’s daughter, so he will attempt to keep her on his side by telling tale after tale.

No word on whether or not Maggie falls for this yet but we’re hoping not. As for Xander, hope springs eternal, if he can just get the Mom on his side, maybe he can finally have a shot with the daughter—thing is Xander, romance doesn’t work that way anymore.

Will Horton and Sonny will get remarried in the hospital, and now that they have—they realize that they have to make every moment count with one another because it could very well be their last. Stop breaking my heart! Somebody’s got to find the cure for poor Will soon, right? He can’t just die and leave the S.S. WilSon unmanned! Come on! Is it time for a cure yet? Stay tuned!