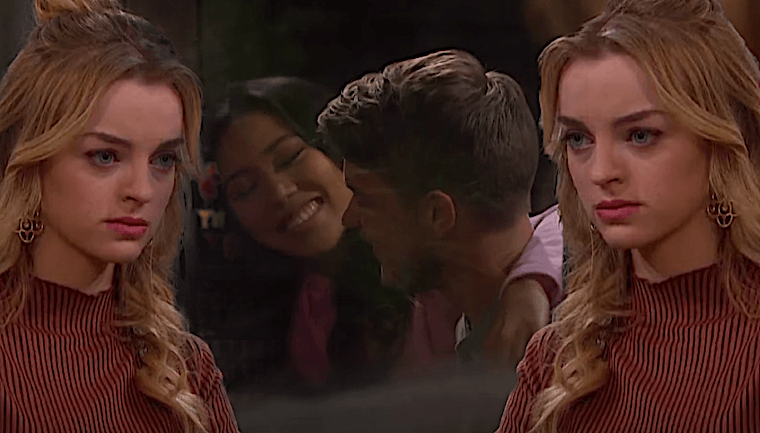 ‘Days of Our Lives’ (DOOL) spoilers tease that just when you thought that Claire Brady (Olivia Rose Keegan) couldn’t stoop any lower, she just did! As a matter of fact, new Days of Our Lives spoilers indicate that Haley Chen (Thia Magia) and Tripp Dalton (Lucas Adams) are in ultimate in danger as Claire tries to see her ultimate revenge on them and kill them both. Yes, it’s about to get real ugly. Here’s what you need to know.

‘Days of Our Lives’ (DOOL) Spoilers: Haley and Tripp Are In Ultimate Danger As Cuckoo Claire Seeks Final Revenge!

As many Days of Our Lives fans know, Claire is the ultimate villain in Salem. She might be a little on the crazy side, too, especially if she doesn’t get what she wants. There are voices in her head that are telling her to do crazy things and unfortunately, she’s been taking them a little too seriously.

New Days of Our Lives spoilers tease that Claire is set to kill Haley and Tripp as she gives them a death by fire sentence. Let’s just say that Claire hasn’t been taking her break up from Tripp very well. She sees Haley Chen as her love rival, even though that’s not the case. But Claire is right that things started falling apart after Tripp & Haley arranged for the whole fake-marriage scheme.

Tripp simply agreed to marry Haley in their fake wedding because she wanted to help a friend stay in the country. But after all of that spiraled out of control, Claire blamed Haley for ruining their relationship. Instead, it’s Claire’s jealousy that made Tripp realize how crazy she is. Ever since he pulled the plug on their relationship, she’s been out of control! And now he’s about to pay the ultimate price since if she can’t have him, neither can anyone else.

‘Days of Our Lives’ (DOOL) Spoilers: New Cabin To Burn

There’s now a strong possibility that yet another cabin will go up in smoke. Haley and JJ Deveraux (Casey Moss) are currently hiding in the Horton cabin up in Canada. Claire, however, will think that Tripp ran away to be with Haley. Not knowing what the real truth is, Claire will try to take matters into her own hands and kill them both. Someone take that lighter out of Claire’s hands already!

Of course, now that Ben Weston (Robert Scott Wilson) is onto Claire after her cellphone ringer gave the clue away, he’ll be coming to the rescue. It’s sad when the only person able to solve a crime in Salem is an ex-serial killer. But regardless of that, Ben will be the hero that saves Tripp & Haley. However, it he might not get the hero’s welcome and fanfare upon his return in Salem since Eve is on a wicked witch hunt to put away the man who murdered her daughter. We can’t say that we blame her, but Ben just can’t seem to catch a break.