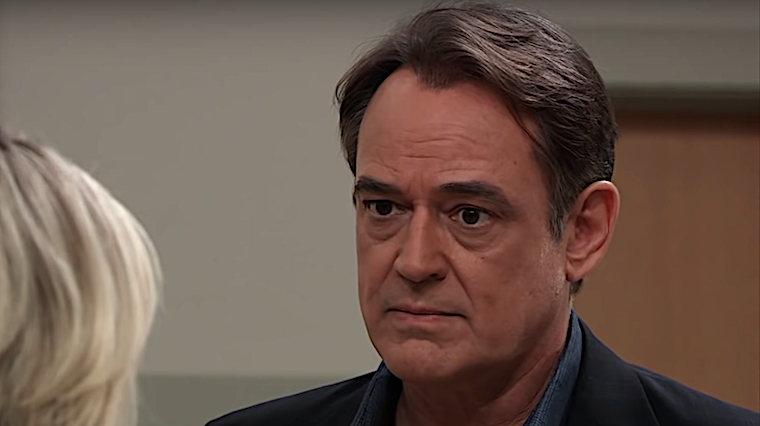 General Hospital recap for Tuesday, May 14 relate some bad news for Willow Tait (Katelyn MacMullen), a threat from Valentin Cassadine, some very common-sense advice from Laura Webber, and more. If you missed all the General Hospital spoilers, here are some highlights.

Port Charles saw a lot of romantic mishaps today, starting with the first date that didn’t go the way Peter August (Wes Ramsey) planned. They’d ended up in Canada after weather diverted the plane, and they ended up with company: Laura and Curtis Ashford (Donnell Turner). Peter and Maxie allowed our investigative duo to hang with them until the storm dies down. They go through a bunch of games, then split into pairs and get some romantic advice.

Curtis, still reeling from the latest news on Jordan Ashford (Brianna Nicole Henry), advises Peter to make the most of every moment, while Laura tells Maxie Jones (Kirsten Storms) to just make the first move herself. Peter’s a complicated guy, and might have trouble doing so. When Peter and Maxie are finally left alone, they have an awkward moment where both are clearly hinting at some bedroom action, but neither will cop to it. Then end up alone in their rooms, picturing the kiss they’d shared earlier. Remembering the advice they were giving, they get up and seek each other out.

Hamilton Finn (Michael Easton) is also having trouble. He’s finally managed to get through to Robert Scorpio (Tristan Rogers) and asked for the ring back. After a little back and forth, Finn is sent into a panic when Robert suddenly curses and ends the call. Why? Because Robert’s just noticed the ring is missing, and he has no idea where it is. He just knows he has to get it back in a couple of hours. He eventually enlists Mac and Felicia Scorpio’s () help. Mac gets a look alike ring, but Felicia isn’t sure this is going to work. While they’re talking, Anna Devane (Finola Hughes) comes along and overhears enough to obviously think Robert wants to propose to her again.

As for Finn, he’s in a panic and wants to get this over with. Harrison Chase comes along and points out that this state isn’t the best for getting down on one knee. Chase explains how Robert hasn’t returned the ring, so Chase offers to show up in a more official capacity to get it. Ha! Finn doesn’t want to resort to his younger brother bailing him out yet, but it seems he’s desperate enough to keep the option open. 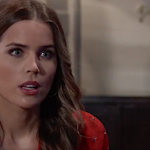 Willow has to face the parents tonight, including Nina Reeves (Michelle Stafford). One of the couples in the room is angry about a book that Willow has included in the classroom, thinking that Willow’s trying to push an agenda on the kids. Franco Baldwin (Roger Howarth) and Elizabeth Webber (Rebecca Herbst) think that the couple’s just anti-gay, as they excluded Aiden Spencer from a party. Surprisingly, Nina steps in and puts the couple in their place. Willow is grateful for the support, but Nina makes it clear that this wasn’t about supporting Willow. It was speaking out against censorship. After the meeting, she tries to broach the topic of curriculum for the new school year with the principal, but he informs her that she won’t be getting invited back.

Sasha Gilmore (Sofia Mattsson) is also in a bit of a jam night. Valentin overheard her and Michael Corinthos (Chad Duell) talking about her slip while under the influence of meds. She explains it away as still seeing her adoptive mother as her true mother, then asks Michael not to say anything. She doesn’t want to hurt Nina. Valentine apparently wasn’t appeased, because once Michael’s gone, he approaches Sasha to remind her that she’s on borrowed time in Port Charles. Once the wedding happens, she’s out of here.

Today was a victory for the those trying to catch Ryan Chamberlain (Jon Lindstrom). Ava Jerome (Maura West) and Kevin Collins have been playing couple again when they get an unexpected assist from Julian Jerome (William deVry). He happens to come across the pretend couple while they’re preparing for a photo op. Not knowing it’s him, they kiss and Julian freaks. He accuses Kevin of taking advantage of Ava, and this leads to a physical confrontation between the pair. Ava isn’t going to stop Kevin from pressing charges, as this will make Ryan lose it.

In Canada, a woman closes the door on Laura and Curtis and we see newspapers inside talking about Avan and Kevin. She promises an unseen person that she got rid of them, then the camera goes back to the papers. We see a hand stabbing the picture of Kevin to close the scene out.