‘Young and the Restless’ spoilers relate that Instagram has been all aflutter lately when Young and the Restless fans saw the actors who play Kerry and Michael getting really close and friendly. Christian LeBlanc, who stars as Michael on the show, posted a sweet picture of himself with the actress who plays Kerry, Alice Hunter. LeBlanc referred to her in the picture as a ray of light. This statement had many fans thinking that they could be romantically involved, but the stars have not confirmed this yet. The picture did feature hunter giving LeBlanc a sweet kiss on the cheek. Apparently the two of them have a wonderful friendship and they have gotten very close since being on the show together.

Our sources have given us some very bad news about Hunter. She may be actually be leaving the Young and the Restless. She has been dropping some interesting hints on her social media pages and in interviews about Kerry’s storyline. Hunter has not said a lot, but from what we have read and heard, we think that the inevitable is going to happen soon, we are just not sure how soon.

The verdict is in this week on #YR! ???? AND will Kyle follow his heart no matter the cost? Make sure to tune in! pic.twitter.com/4LtY4hE9UD

On the show, Kerry has been texting with someone that has remained mysterious to all of the watchers and the other characters on the show. Is she texting with Ashley Abbott or is it someone else? We all know that she has been playing all sides of the Jabot family and she has both Jack and Phyllis in the palm of her hand. We are not sure what her master plan is, but our sources have shown that whatever she is planning, it will cause her character to disappear from the show forever.

We think that Kerry is texting Ashley because we do know that she is returning to the show, only for a brief period of time. We could be wrong, but no matter what happens, we are going to see some really good drama as it unfolds and as Kerry gets deeper into it. 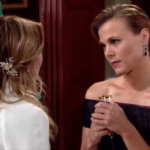 ‘Young and the Restless’ spoilers: United By Hate For Phyllis, Nick, Billy and Jack Form Triple Alliance To Oust Her From Jabot – Phyllis and Summer GC Days Numbered?

We are extremely sad that Kerry’s character is leaving the show, but we are sure that Hunter will move onto great things and we hope she will continue to act. Perhaps she is headed to another one of our favorite soaps. Only time will tell what is next for Kerry and for Hunter, but we are going to continue to watch to see just how dramatic her exit really is!

‘Bold and the Beautiful’ Spoilers: Flo Ends Up Being Hope’s Hero and Sally’s Nightmare

CBS ‘The Young and the Restless’ Spoilers: Is Tessa Porter (Cait…

CBS ‘The Young and the Restless’ Spoilers: Oh Billy, One Lie, Two Lie, A…

CBS ‘The Young and The Restless’ Spoilers: Will Sharon Survive Her Breast…

CBS ‘The Young and the Restless’ Spoilers: Faith Makes Shocking Move After Learning…