‘Days of Our Lives’ spoilers relate that Leo Stark (Greg Rikaart) is in trouble, Gabi Hernandez (Camila Banus) might be staring down the unemployment line, Claire Brady (Olivia Rose Keegan) gets some unexpected news, and a trap is set. If you missed the Days of Our Lives spoilers, let’s get caught up on your Days of Our Lives recap highlights.

Leo shows up at Stefan DiMera’s (Brandon Barash) and we have to take a moment here. We knew the change was coming, but we weren’t quite prepared for this new Stefan. We’ll get into that more another time. For now, suffice it to say, there’s a new guy in town in more ways than one. As Leo is babbling on about helping “Cain his Able of a brother” and what payment he can expect, Stefan moves into action. He gets Leo by the throat and demands to know what kind of a scam he’s pulling. Seems DiMera missed out on a great opportunity chasing false leads, allowing Titan to swoop in and steal something under their noses. Leo’s shocked and insists he just told what he knew. He suggests there’s someone else spilling the beans and offers to help find out who. Stefan’s sure he already knows.

Stefan catches Brady and Chloe in an intimate moment, while Ciara gets up close and personal with Ben in the hospital. Watch Days of our Lives, weekdays on NBC. pic.twitter.com/KUWx8MXeY3

Later, Leo goes back to Casa Kiriakis and reads Brady Black (Eric Martsolf) the riot act for screwing his new job. And we can’t even when Brady points out that Leo tried screwing him over first. He doesn’t care one bit about their supposed brotherhood and meets Leo’s threats, pretending to beg Leo’s silence so daddy won’t ground him or take away his allowance. We love these two going at it. Leo decides to go see John Black (Drake Hogestyn), and Brady follows because he seems to suspect more conning is afoot. They both arrive at Marlena’s room, and Leo announces how he needs to see John.

Meanwhile, Gabi (who was celebrating her victory with Brady earlier) gets summoned to the DiMera Mansion. Stefan accuses her of sabotaging a deal, and she obviously denies as always. She asks why she’d bite the hand that’s paying her, to which Stefan replies that she hates him. She won’t deny that much, but she says Stefan might have done this himself to lower stock prices to get a bigger share of control. He’s determined to get to the bottom of this, and if she’s there, he’s going to call the board and get her sent packing.

Diana Cooper (Judith Chapman) drops by the hospital, where John questions her about the attempted murder of Marlena Evans (Deidre Hall). She’s nervous, but seems slightly relieved that he wants to know whether she saw Kristin DiMera (Stacy Haiduk) around the hospital that day. She says she didn’t, but her mind was elsewhere. She frets to herself after leaving the room over whether she wiped her prints off the IV bag or not.

In order to help herself, she stops by and uses her former ownership of the Spectator and friendship with John as a reason to question Lani Price (Sal Stowers) and Eli Grant (Lamon Archey) for an alleged article. Before Lani heads out, Eli asks her to take the IV bag from evidence and lock it in Hope Brady’s (Kristian Alfonso) safe. After all, this is a DiMera, so you can’t be too careful. Ha! Lani agrees, and later on, Diana sneaks in to try getting the bag. And we cheer when we see John was lying in wait for her. We kind of thought Marlena had a weird vibe during their scenes with Diana before. 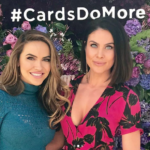 Days of Our Lives Spoilers: Star Nadia Bjorlin (Chloe Lane) And Chrishell Hartley Team Up For Hallmark’s Cards Do More

Claire can’t even when Tripp Dalton (Lucas Adams) says he’s going to marry Hayley Chen (Thia Megia) to keep her in the States. She gets that classic Claire bug-eyed thing going on, as well as her trademark barely controlled psycho voice as she tells Tripp all the reasons why this is a terrible idea. Not to mention how much she doesn’t like the idea of her boyfriend being married to another girl. Eventually, she agrees to go along with the idea, but we can see those wheels turning.

Meanwhile, JJ Deveraux (Casey Moss) is trying to best to convince Haley he is the one to marry. He goes on about how it’d be more of a real marriage with him, but she still can’t quite get over what he’d done. She thinks marrying Tripp is the cleanest option.